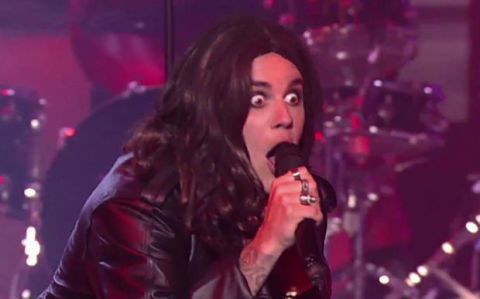 In the newest clip for Lip Sync Battle on Spike— that hugely popular show in which you get to watch your favorite celebs make total fools of themselves as they compete to become lip-syncing champions—Will Arnett does some impressive Mr. Roboto moves in a construction worker suit as he competes against Alison Brie showing off some serious rapping skills.

But the real show-stopper is Justin Bieber's wig, which he's presumably wearing to help him channel Ozzy Osbourne as he performs his classic hit, "Crazy Train (Speak of the Devil)."

Empire stars Taraji Penda Henson and Terrence Howard also go head to head, and while Henson may be bringing Mary J. Blige (literally and figuratively), Howard's epic wig and side-split during The Commodore's "She's a Brick House" promises to steal the show.

You can catch the new episode, which also features Iggy Azalea and her fiancé Nick Young, on July 9 at 10 p.m. EST on Spike.

This content is imported from YouTube. You may be able to find the same content in another format, or you may be able to find more information, at their web site.
This content is created and maintained by a third party, and imported onto this page to help users provide their email addresses. You may be able to find more information about this and similar content at piano.io
Advertisement - Continue Reading Below
More From Celebrity
Meghan and Harry Opened Up About Online Hate
Miley Cyrus Said She Was Chased by a UFO
Advertisement - Continue Reading Below
Why Prince William Was Jealous of Prince Harry
Kate Wore a Stunning Fall Red Coat for Visit
Gigi and Zayn's Body Language, Decoded By A Pro
Billie Eilish Posts Nikes Version of 'The Dress'
Ashley Graham Celebrates Body With Nude Photo
Gigi Hadid's Baby Is Already Wearing Moschino
Adele Is Hosting 'SNL' in a "Full Circle" Moment
Harry Pranked the Queen by Changing Her Voicemail