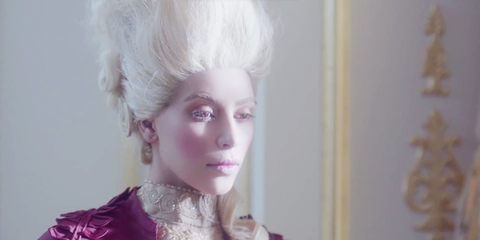 If Hype Energy drinks existed in the respective eras of Audrey Hepburn and Marie Antoinette, we're inclined to think they'd scoff at the idea of the garish, stimulant-heavy elixirs, but that didn't stop Kim Kardashian from dressing up as each of the iconic ladies in a new, you-literally-have-to-see-it-to-believe-it commercial for the brand.

In the ad, Kardashian initially transforms into Hepburn—complete with mod fringe and a black-on-black get-up  à la Funny Face—channeling the classic icon riding around on a bike before falling and hitting the ground so hard she falls unconscious, her Hype Energy cans spilling out of her metal basket.

In a matter of seconds, she's transported to 18th century France, with towering white hair, ethereal makeup, and head-to-toe lace getting some beauty rest on a velvet chaise. Awaking from her slumber, she reaches for sustenance in an elegant wine glass, filled with some of that purplish Hype drank, naturally. Then BOOM, she's Hepburn again for like a second, until she shatters the space-time continuum yet again, and is herself, Kim Kardashian West circa 2015—complete with the wavy lob, a Yeezy T-shirt, lace-up, thigh-high boots. Makes sense.

Watch the commercial in full, below: