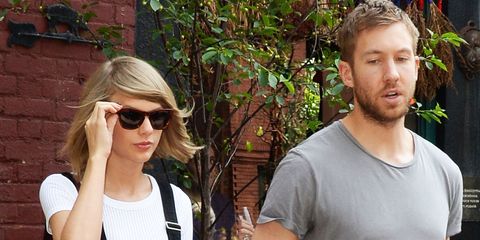 Original story, 10/12: Just let a couple live, folks. After the internet went nuts earlier today over the "fact" (using the term loosely) that Taylor Swift and Calvin Harris had called off their relationship (all because, salaciously, Harris had "gone" "to" "a" "Thai" "massage" "parlor" "and" "gotten" "a" "happy" "ending"), Selena Gomez set the record straight during an interview on SiriusXM's Andy Cohen Live this morning.

"What?! Oh, I don't know. I think I would have found that out," she said when Cohen asked her about the gossip. "I didn't even know—is that a rumor? Oh gosh, of course. This is honestly so stupid."

The idea that Tay's #1 Squad Member wouldn't know of her breakup is a little suspicious, no? For now, we're on the side of love. TALVIN FOREVER.

Samantha Leal Senior Web Editor I'm Sam, the senior editor at MarieClaire.com.
Advertisement - Continue Reading Below
More From Celebrity
Prince Harry Spotted on a Grocery Run in Canada
Kanye West Leaves Kim Kardashian in an Elevator
Advertisement - Continue Reading Below
Channing Tatum Is "Happy" for Jenna Dewan
Inside Chrissy Teigen and John Legend’s Home
A Look at Royal Family Portraits Through the Years
Are The Weeknd's 'After Hours' Lyrics About Bella?
Kendall and Harry Had a Moment At the Brit Awards
Dwyane Wade on Getting Zaya's Pronouns Right
Harry Styles' Diana-Inspired Brit Awards Outfits
Jenna Dewan and Steve Kazee Are Engaged