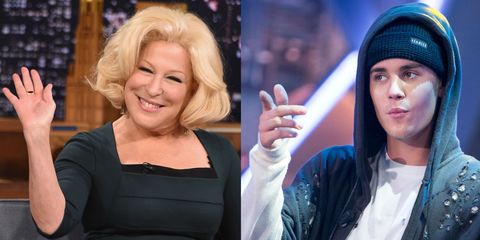 Remember when photos of Naked Justin Bieber took over the internet and you temporarily went blind? And then Bieber's dad inexplicably tweeted about his son's "thing" (his words), causing Bette Midler to subtweet "The biggest dick in this situation is the dad who abandoned his son"? Yeah, Justin Bieber wasn't thrilled.

The "Sorry" singer attempted to throw shade Midler's way by mispronouncing her name during an interview with Billboard, saying "This Britt Meddler. I don't even know who that is, honestly. I wanted to immediately say 'Who is this lady?', but then I'm just fueling this negativity."

.@justinbieber Britt Meddler! I don't know who that is either! But damn that bitch!

#TBT to me and my BFF! Miss seeing your beautiful face, @AdeleDazeem! pic.twitter.com/PDT1Dj2nrn

Will drama associated with Justin Bieber's penis ever cease? Hopefully not.

Mehera Bonner Contributor Mehera Bonner is a news writer who focuses on celebrities and royals.
This content is created and maintained by a third party, and imported onto this page to help users provide their email addresses. You may be able to find more information about this and similar content at piano.io
Advertisement - Continue Reading Below
More From Celebrity
The Queen Has a Collection of Dog Toys for Sale
Meghan Revealed the Nod to Diana in 'The Bench'
Advertisement - Continue Reading Below
Celebs Are Posting Tons of Father's Day Tributes
Will Spent Father's Day with George and Charlotte
Charles Won't Allow Archie to Become a Prince
Royals Had Several Talks About Archie's Skin Color
See Blake Lively's *Impressive* Watermelon Cake
Prince Charles Cant Deal with Harry's Criticisms
Serena Gave Daughter Olympia a Tennis Lesson
Meghan Shared What Helped Her Through 2020