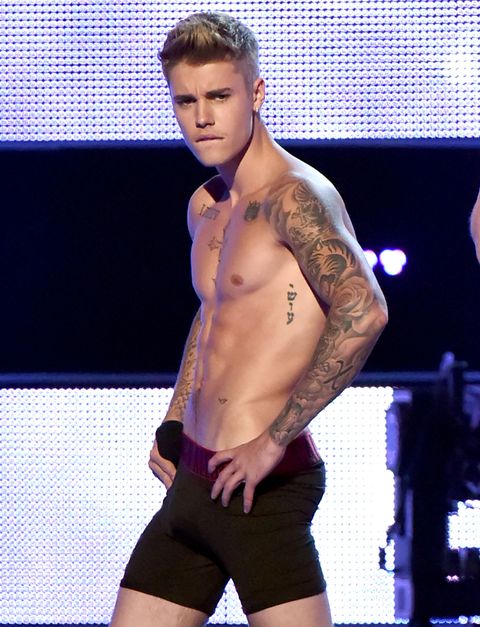 With the kind of open-legged Captain Morgan stance that makes shrinkage a non-issue (the hashtag over the crotch helps too), a Calvin Klein boxer-briefed Justin Bieber stares into the middle distance for the brand's spring 2016 campaign. Is he playing off the marble statue to his right? Is he regretting that time he demanded we clap on the beat or not at all? Nope—he's just flaunting in #hisCalvins.

I flaunt in #mycalvins. Introducing the @CalvinKlein spring 2016 campaign pic.twitter.com/qe8MvgHATZ

Meanwhile, Kendall Jenner wants to be with you in #herCalvins.

I want to be with you in #mycalvins. My new Spring 2016 @calvinklein campaign... What do you do in yours? pic.twitter.com/QXVkdx9ylP

And FKA Twigs wants to achieve excellence in hers.

i excel in #mycalvins. here's a first look at the new spring 2016 @calvinklein campaign, shot by tyrone lebon pic.twitter.com/d1QhG1aFIY

And Fetty Wap acquires monetary compensation for his efforts in his.

Finally, this is what they all do in #theirrespectiveCalvins.

Introducing the S16 Calvin Klein global advertising campaign. What do you do in yours? #mycalvinshttps://t.co/gndrvNJ7Bw