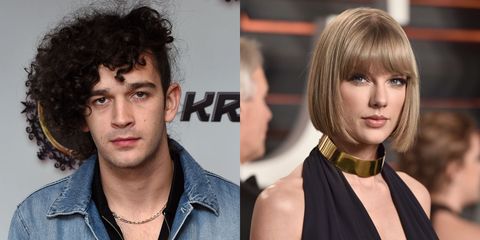 Alternative headline: "Area Man Can't Get with Girl, Consoles Himself with Sexist BS."

In an interview with Q magazine that probably made Taylor Swift rue the day she ever batted her mega-volume-ized eyelashes at him, the 1975's Matt Healy said their "flirtation" never went anywhere, which was a good thing because he wouldn't have been able to handle having a more famous girlfriend.

"Yeah. Absolutely," he said when asked whether he has a fear of losing himself in a relationship. "And the reason I mention that is because if I had gone out with Taylor Swift I would've been, 'Fucking hell! I am NOT being Taylor Swift's boyfriend.' You know, 'FUCK. THAT.' That's also a man thing, a de-masculinating, emasculating thing."

Well, buddy, you don't have to worry about that anymore.