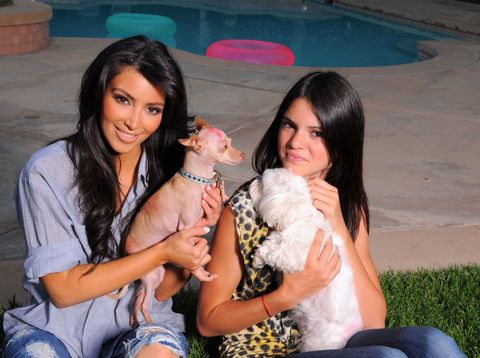 While Miley Cyrus has devoted an entire album to her late pets (aptly named—wait for it—Dead Petz), Kim Kardashian is choosing a less sentimental route, recounting the stories of her family's many early-aughts accessory dogs with LOLs...and basically not much else.

"My fam has had SO many pets over the years, from dogs to rabbits and even a peacock named Peter Pan, LOL," the haircut faker wrote in a new post on her website Wednesday. "The funniest thing is, I'm not the biggest animal person; sure, I love cute fluffy kittens but I don't die to constantly have a pet." Which is why North, whom Kardashian says is desperate for a furry companion, must settle for a fish tank instead.

Thank you @disneyland for making all of my princess dreams come true today!

Kardashian then recalls a litany of lap dogs, which, with the past-tense descriptions, reads kind of like that scene in The Incredibles where all the superheroes' photos pop up with "terminated." There's Kendall's Great Dane Blu "who literally pooped everywhere," a Chihuahua named Dolce, and her late father's three Dobermans.

She doesn't go into many specifics, but it's a comfort to know that all dogs go to heaven.