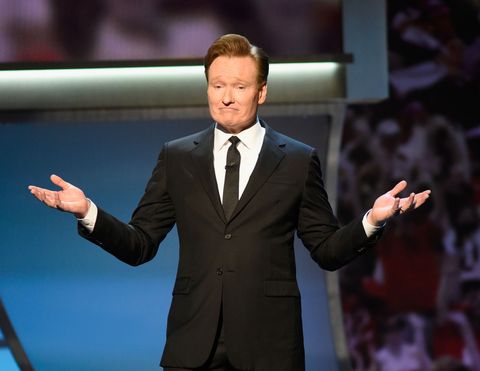 Kim Kardashian was held up at gun point, bound, gagged, and robbed, and there is literally nothing funny about the situation. Just ask comedian James Corden, who—instead of making an ill-advised joke about Kim during The Late Late Show—tweeted the following.

People making jokes about @KimKardashian tonight would do well to remember that she's a mother,a daughter,a wife,a friend.Be nice or shut up

Meanwhile, Conan O'Brien took a less respectful approach to the situation, telling his audience, "No one was hurt, but in a mansion in Paris, Kim Kardashian was robbed at gunpoint. Kim was bound and gagged, then the robbers broke in." The video starts at around minute 3:15.

Look, LOLs are important even in times of distress and crisis, but making fun of a woman who feared she was about to be raped by a group of strangers is not funny. Not now, not ever. Furthermore, implying even in jest that Kim somehow enjoys being bound and gagged when this was a traumatizing experience for her is just...no.

On that note, here's James Corden and Jamie Lee Curtis defending Kim as a palate cleanser.