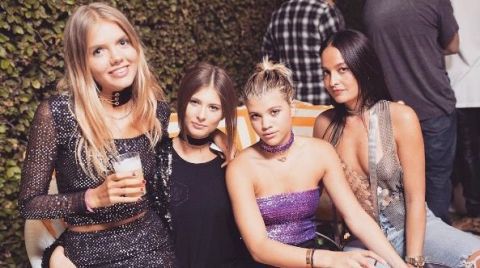 Justin Bieber had a couple of high-profile flings this summer—with Sofia Richie and British model Bronte Blampied, specifically. Though both romances fizzled out quickly (at least for now), Bieber's recent exes don't seem to harbor any ill will toward one another. In fact, they're becoming legit friends.

According to MTV UK, Richie and Blampied have been peppering evidence of their budding friendship all over social media lately. And, for the record, it's pretty adorable.

And Richie made their friendship Instagram official with a series of pics earlier this weekend.

This looks like a bona fide squad in the making, which means someone needs to put these girls in touch with Selena Gomez, STAT.

Kayleigh Roberts Kayleigh Roberts is the weekend editor at Marie Claire, covering celebrity and entertainment news, from actual royals like Kate Middleton and Meghan Markle to Hollywood royalty, like Katie Holmes and Chrissy Teigen.
This content is created and maintained by a third party, and imported onto this page to help users provide their email addresses. You may be able to find more information about this and similar content at piano.io
Advertisement - Continue Reading Below
More From Celebrity
Meghan Markle Expresses Sympathies to the Queen
Prince Harry Remembers Prince Philip
Advertisement - Continue Reading Below
Prince William Statement on Prince Philip's Death
Meghan and Harry Are Facing Security Threats
Selena Gomez Is Drenched in Fake Blood on Set
Amanda Seyfried Talked About Having Panic Attacks
Harry Arrives in the U.K. For Philip's Funeral
Matthew Perry Deletes 'Friends' Reunion Instagram
The Queen's Corgis Are Helping Her With Her Grief
Charles is Looking Forward to Seeing Harry Again