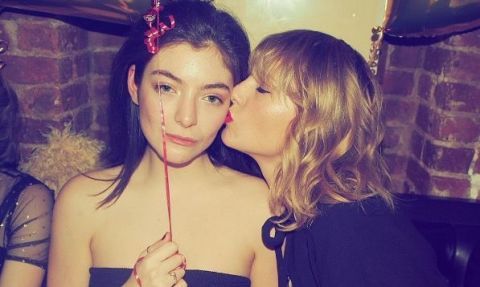 Lorde turned 20 yesterday and it was *literally* all she could think about.

"Tomorrow I turn 20, and it's all I've been able to think about for days," she wrote in an emotional Facebook post about her birthday, her new music, and the many ~feels~ she was having about her impending adulthood. "I walk around the city, up by the park and by the health food store and down into the subway, this new age hanging in front of my eyes like two of those Mylar balloons that never come down. Can people see it, I wonder, that I'm about to cross over?"

Looks like Lorde's 20th wasn't just a Big Deal to her. It was also a Big Deal to her BFF, Taylor Swift, who, let's be honest, makes a Big Deal out of all of her friends' most special days (but that's probably why approximately one million famous people want to be her best friend).

Taylor threw Lorde (or Ella, as Taylor nonchalantly calls her all over social media) an epic party.

And the day was also a Big Deal to the very large, eclectic group of celebrities who attended.

And Aziz Ansari, because why not?

Turning 20 probably isn't *so* traumatic at a party like this one, right?

Kayleigh Roberts Kayleigh Roberts is the weekend editor at Marie Claire, covering celebrity and entertainment news, from actual royals like Kate Middleton and Meghan Markle to Hollywood royalty, like Katie Holmes and Chrissy Teigen.
This content is created and maintained by a third party, and imported onto this page to help users provide their email addresses. You may be able to find more information about this and similar content at piano.io
Advertisement - Continue Reading Below
More From Celebrity
The Palace Just Shared Prince Louis Birthday Pic
Meghan and Harry Talked Every Day During UK Trip
Advertisement - Continue Reading Below
J.Lo Wishes A-Rod's Daughter a Happy Birthday
Irina Shayk Shared a Rare Photo of Her Daughter
John Travolta Talked Dancing With Princess Diana
Meghan Markle and Archie Speak to the Queen
Who Is Alexandria Ocasio-Cortez's Partner?
Did Charles, Harry, and William Mend Relationship?
The Kardashians' Most Body-Confident Nude Shoots
Chrissy Teigen + Meghan Markle Spoke About Loss