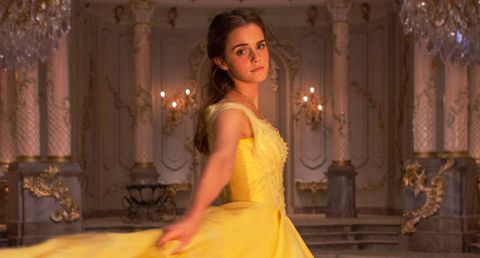 In anticipation of the live-action Beauty and the Beast movie, Disney has released a new Belle doll that's allegedly in Emma Watson's likeness. As legions of enraged and amused internet users have pointed out, however, the doll actually looks eerily like Justin Bieber. See the similarity for yourself, but know that you can never unsee it.

BuzzFeed was the first to point out the similarities between this new, disturbingly big-foreheaded Belle and the Biebs, but Twitter has run wild with comparisons.

when you order an emma watson doll online but a justin bieber doll in a yellow dress & a wig arrives instead pic.twitter.com/PUQUBXyufT

Of course, some users didn't agree that the doll looks like Justin Bieber. They didn't think it looked like Emma Watson, either, but they did offer up some (hilarious) alternatives.

This doll looks like Jennifer Garner trying to disguise herself as Emma Watson in an episode of Alias. pic.twitter.com/c071qeSdXN