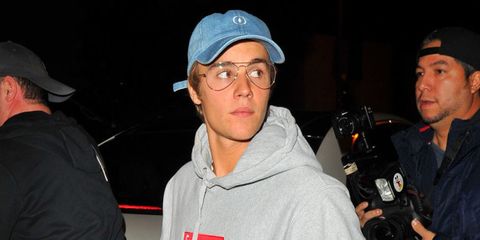 Justin Bieber does not have an opinion on Selena Gomez's rumored relationship with the Weeknd—or at least not one he's willing to share.

TMZ caught up with Justin outside Catch in Los Angeles and asked him what he thought of Selena's new rumored romance and he had no comment...not even to say "no comment."

We can't blame Justin. For one, it's not really his place to comment on or offer his "approval" of Selena's relationships. And for another, he probably just doesn't want to, even if it were his place.

In case you somehow missed it, Selena and the Weeknd set the internet on fire when photos of them kissing surfaced last week, and Justin might be only person who doesn't have an opinion about it.

Kayleigh Roberts Kayleigh Roberts is the weekend editor at Marie Claire, covering celebrity and entertainment news, from actual royals like Kate Middleton and Meghan Markle to Hollywood royalty, like Katie Holmes and Chrissy Teigen.
Advertisement - Continue Reading Below
More From Celebrity
A Look at Royal Family Portraits Through the Years
Are The Weeknd's 'After Hours' Lyrics About Bella?
Advertisement - Continue Reading Below
Kendall and Harry Had a Moment At the Brit Awards
Dwyane Wade on Getting Zaya's Pronouns Right
Harry Styles' Diana-Inspired Brit Awards Outfits
Jenna Dewan and Steve Kazee Are Engaged
Kim Seemingly Tried to Kiss Kanye on a Kiss Cam
Ashley Graham Continues to Spread Body Positivity
'Bachelor' Victoria F. & Peter's Ex Had a Fight
Watch Meghan Attend the Ballet with a Puppet