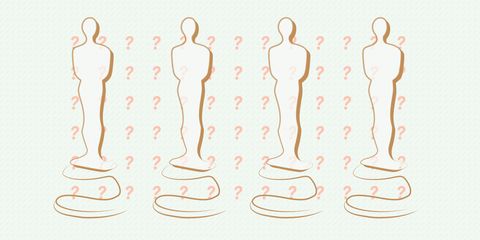 Awards season 2017 is coming to a close and that means the Oscars are nigh. You may have heard that this is La La Land's year (the modern-day musical does boast a record-tying 14 nominations), but don't expect the Emma Stone/Ryan Gosling love story to sweep every category. Here are our predictions for who will take home gold statues this year, and who actually deserves to.

Manchester by the Sea

In conclusion: La La Land is as close to a shoe-in as you get with the Oscars, but there are many who believe that Moonlight—which tells an important story—should win. While La La Land provided viewers with some much-desired escapism and a win in the Best Picture category isn't totally undeserved, the category is still very debatable.

Should win: Split between Damien Chazelle and Barry Jenkins

In conclusion: Chazelle created a beautiful, appealing heightened reality in La La Land, and his vision will likely be rewarded with an Oscar. But Moonlight director Barry Jenkins summoned intensity and depth from his actors, and is equally-deserving of the award.

Best Actor in a Leading Role

Casey Affleck, Manchester by the Sea

In conclusion: Affleck is still considered the frontrunner in this category, although he lost some steam recently (thanks in large part to persistent sexual harassment allegations). Meanwhile, Washington scored a big coup with his win at the Screen Actors Guild Awards, which may signal the tide turning in his favor for the Oscars. His performance in Fences is nuanced and moving, but the win would be his third—an Oscars rarity.

Best Actress in a Leading Role

In conclusion: Huppert gave a fantastic performance as a sexual assault survivor, but foreign language performances rarely win in the acting categories, so she's faced an uphill battle from the start. The Academy will likely give the award to Stone for her turn as a young ingenue because, let's face it, Hollywood loves movies about Hollywood.

Best Actor in a Supporting Role

Lucas Hedges, Manchester by the Sea

In conclusion: It would be a huge upset and a pretty much unanimously agreed upon tragedy if Mahershala Ali didn't win the Supporting Actor trophy this year.

Best Actress in a Supporting Role

Michelle Williams, Manchester by the Sea

In conclusion: The only opposition Viola Davis has is from people who think she was submitted in the wrong category and should be winning an Oscar for Best Actress in a Leading Role. This is Davis' third nomination, and she should finally get the recognition she deserves.

Kenneth Lonergan, Manchester By the Sea

Will win: It's a toss-up between La La Land and Manchester by the Sea.

Should win: Manchester by the Sea

In conclusion: Damien Chazelle might pick up the award for orchestrating the world of La La Land from start to finish, but early predictions leaned in favor of Manchester by the Sea scribe (and screenwriting veteran) Kenneth Lonergan.

In conclusion: Moonlight will likely be snubbed in other categories that it deserves to win, but the Academy will view Best Adapted Screenplay as a chance to award Barry Jenkins for the incredible film.

Kubo and the Two Strings

My Life as a Zucchini

In conclusion: Disney and Pixar tend to dominate this category, and this year Disney's critical and box office smash Zootopia will take home the prize.

In conclusion: Even musical powerhouses like Justin Timberlake and Lin-Manuel Miranda won't be able to derail La La Land's success train. The musical has two songs nominated in this category, which could lead to some cannibalizing of votes, but "City of Stars" will probably still emerge victorious.