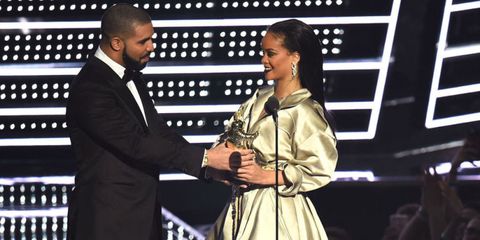 You can't avoid your exes forever, even if you're Drake and Rihanna. As Billboard reports, the on-and-off-again couple were recently spotted in the same space for the first time since their latest split in October.

So where did this run-in happen, you might ask? An award show? A Hollywood hotspot? Nope. At a little kid's birthday party. Just when you thought things couldn't get more awkward.

In footage leaked through a mutual friend's Snapchat (where else?), Rihanna can be seen playing with little kids by a ball pit while Drake sits awkwardly in a corner at the same party, surveying the scene and, we presume, mentally counting down the minutes until he can politely bow out.

We've all been there.

Kayleigh Roberts Kayleigh Roberts is the weekend editor at Cosmo, focused on celebrity news and royals.
This content is created and maintained by a third party, and imported onto this page to help users provide their email addresses. You may be able to find more information about this and similar content at piano.io
Advertisement - Continue Reading Below
More From Celebrity
Meghan Markle Looked Gorgeous at Global Citizen
Harry and Meghan Are Taping Their NYC Trip
Advertisement - Continue Reading Below
Keep an Eye on Lady Louise Windsor
Princess Beatrice's Daughter May Get a Royal Title
James Middleton’s Wife Thought He Was a Waiter
Meghan Markle Got a New Nickname
Harry Said the Queen and Philip Were "Adorable"
Kate Middleton Played Tennis With Emma Raducanu
Tom Felton Collapsed on a Golf Course
Ashley Olsen Made a Rare Red Carpet Appearance