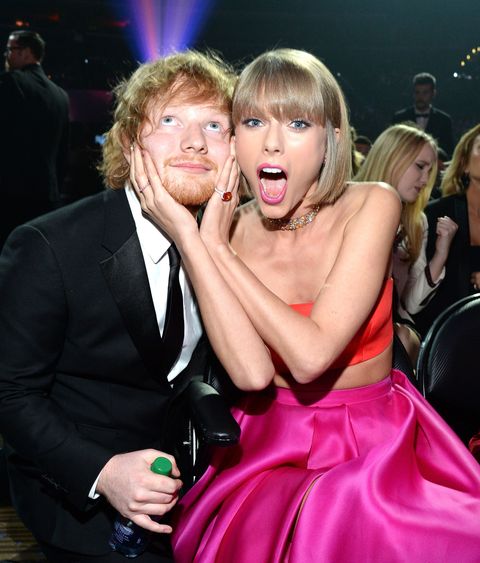 The annual TIME 100 list is out (you know, the 100 most influential people in the world, as decreed by Time magazine) and Ed Sheeran is on it. The ginger Brit has had a pretty big year. He released his first new album in three years and returned to social media after an extended hiatus.

But maybe the biggest sign that he's actually an influential human is the fact that Taylor Swift herself penned his TIME 100 bio. Winning a Grammy? Meh. Getting Taylor Swift to (even kind of) come out of her 2017 hermit-ude? Now, that proves you wield influence.

So what did Swift have to say about her guy BFF? Nothing but good things, obviously.

Here she is on the secret to Ed's success:

Whether by choice or an unconscious evolution, when he decided on his musical ambitions, Ed became less of a boy and more of a tank. He is protected by an impenetrable and ever-present armor of enthusiasm that has helped him endure any setback, letdown or underestimation.

And on the moment he (wrongly) thought he'd never, ever win a Grammy:

A few years ago, in a rare moment of admitting feeling defeated, Ed said to me, "I'm never going to win a Grammy." Yes, you are, I said. You're going to sweep the whole thing one of these years. It was a few weeks later when he met me in a dance-shoe store in London, where I was picking out rehearsal outfits, and said, "You have to hear this." It was a song he'd just finished called "Thinking Out Loud," which went on to win Song of the Year at the Grammy Awards in 2016.

Congratulations, Ed. Now, use that influence to get Taylor to post even one Instagram that proves she's alive. We'll settle for an Instagram Story at this point.

Kayleigh Roberts Kayleigh Roberts is the weekend editor at Marie Claire, covering celebrity and entertainment news, from actual royals like Kate Middleton and Meghan Markle to Hollywood royalty, like Katie Holmes and Chrissy Teigen.
This content is created and maintained by a third party, and imported onto this page to help users provide their email addresses. You may be able to find more information about this and similar content at piano.io
Advertisement - Continue Reading Below
More From Celebrity
Harry and Meghan Reportedly Have a Four-Book Deal
Naomi Osaka Lit the Olympic Cauldron in Tokyo
Advertisement - Continue Reading Below
John Legend Performed "Imagine" for the Olympics
Simone Biles Is Honored With Her Own GOAT Emoji
Kate Winslet Reveals Her Favorite Red Carpet Look
Margot Robbie Had a Life-Size Cutout of John Cena
Jennifer Lopez and Ben Affleck Are IG Official
Celebs Share Their Emotional Infertility Stories
14 Candid, Unseen Photos of the Royal Family
Rare Photos From Diana and Charles' Wedding