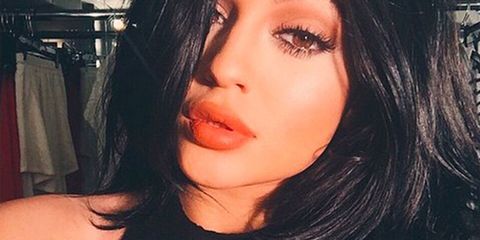 Update, 4/21: Kylie took to Twitter in response to the #KylieJennerLipChallenge, and we gotta say: Girl has a good point.

I'm not here to try & encourage people/young girls to look like me or to think this is the way they should look. (Cont...)

I want to encourage people/young girls like me to be YOURSELF & not be afraid to experiment w your look. ❤️❤️❤️

And if you *are* experimenting, may we suggest this lip plumper we tried as opposed to a shot glass?

Update, 4/21: A doctor has confirmed that the lip challenge can cause serious damage. "The new trend in trying to DIY lip plumping is quite concerning," Dr. Dendy Engelman, a board certified dermatologic surgeon, told Seventeen.com. "Not only can significant pain, swelling, and bruising result from these suction techniques, but there is potential risk for scarring and permanent disfigurement with repeated attempts." Scary...and confirmation that specially designed lip plumper products are a much better bet.

Original post, 4/20: Teens of the Internet began a #KylieJennerLipChallenge where they put "a glass over their lips to create an airlock on their skin for as long as five minutes," according to MTV UK News. They're doing it to see if they can get Kylie-esque lips:

The hashtag has more than 700 mentions on Twitter so far which doesn't necessarily mean 700 humans stuck bottles on their faces and tweeted about it, but there's no way to confirm that.

Anyway, it's not going so well for most people:

just did the #kyliejennerchallenge wtf is wrong with me pic.twitter.com/rG9Tv62xSa

I'd say "don't try this at home," but they already did! Here's your reminder that Kylie is most likely not suctioning shot glasses to her face to achieve her look; she has a glam squad team of professionals...but as we can tell you from experience, even then the results might not be worth it.

Pucker Up: The History of Red Lipstick