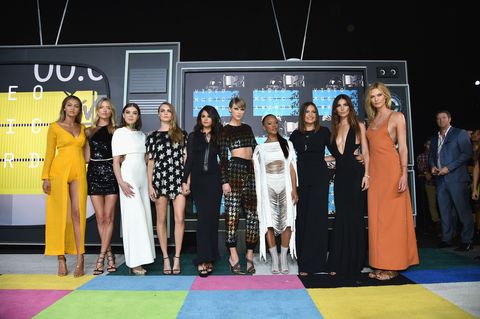 We already knew Taylor Swift's girl squad is worth a lot when  it comes to beauty, popularity, and epic Instagram moments—but now we've got an idea of how much they're worth, period. Although Swift's circle of friends extends to actors, athletes, and musicians, the group that dominates her crew (and Instagram feed) are the models. A new report by Forbes calculated a year's worth of earnings of some of her key squad members who made it on the World's Highest-Paid Models List—Karlie Kloss, Martha Hunt, Lily Aldridge, Gigi Hadid, Cara Delevingne, and Kendall Jenner—and, as you'd expect, it's impressive. Swift alone brings in $80 million, and combining that paycheck with her friends' adds up to a whopping  $104.5 million. Below, find out how much each squad member earns individually—and how much that translates into necessary Taylor Swift Girl Gang supplies, because this squad is nothing if not prepared.

How many Polaroid cameras that can buy:36,824

How many matching festive Fourth of July onesies that can buy: 136,872