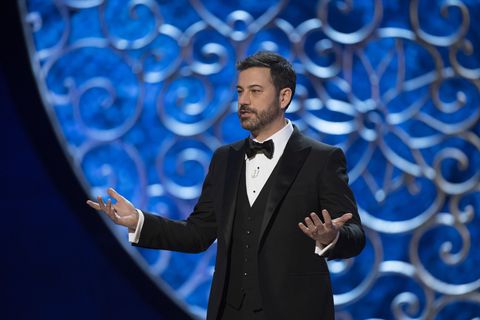 Jimmy Kimmel just trolled Donald Trump live from the Oscars stage, thanks to the magic of Twitter, and it was glorious.

"We're more than two hours into the show and Donald Trump hasn't tweeted once," Kimmel said. "I'm starting to get worried about him." He proceeded to take out his phone, project its display onto the big screen, and tweet The Donald to check if he was okay.

Hey @realDonaldTrump u up?

"Hey @realDonaldTrump u up?" Kimmel asked in his first tweet. He then added a follow-up: "#Merylsayshi." (FWIW, the first tweet has more than 100,000 retweets in less than 5 minutes.)

This was far from the night's first Trump diss—Kimmel dedicated a large chunk of his opening monologue to mocking the president for calling Meryl Streep "overrated." White House press secretary Sean Spicer did say Trump had better things to do this evening than hate-tweet the Oscars—now, we wait and see whether he can resist this open Twitter provocation.

This content is created and maintained by a third party, and imported onto this page to help users provide their email addresses. You may be able to find more information about this and similar content at piano.io
Advertisement - Continue Reading Below
More From The Oscars 2021
See Adele's Perfect Oscars After-Party Look
Emrata Wore the Most Emrata Outfit to Oscar Party
Advertisement - Continue Reading Below
J.Lo Outshone Everyone at the After Parties
Please Look at These Brad and Regina Photos
Chrissy Wore a Mint Dress With a High Slit
Jennifer Aniston Saved Her Best LBD for Last
Did You Spot Charlize Theron's Hidden Hair Detail?
Billie Eilish's Reactions Made the Oscars
Timmy Photobombed Margot on the Oscars Red Carpet
Elizabeth Banks Rewore Her 2004 Oscars Dress