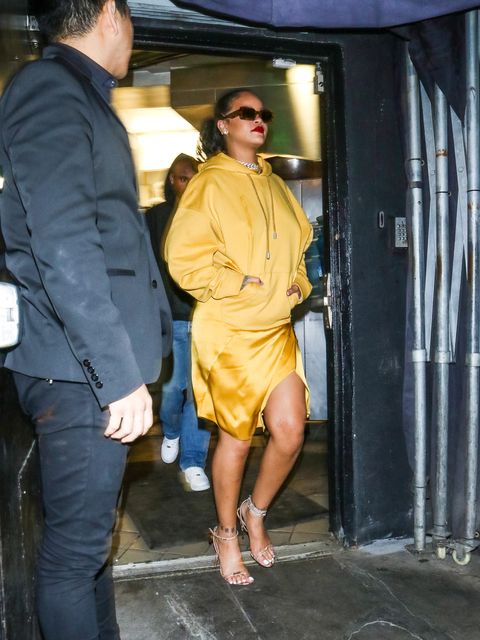 The next time someone tells you that a hoodie isn't appropriate for a night out, show them these photos. Rihanna was photographed wearing Fenty's yellow hoodie-skirt dress while out with her good friend A$AP Rocky. (And they're just friends, despite those dating rumors.) Rihanna accessorized the dress with sunglasses, stilettos, a chain choker, and ankle bracelets.

The dress is on sale for $740, if you're so inclined; you can just toss a matching hoodie over a slip dress to recreate the vibe. Add heels and jewels, and you're ready to go.

For a similar look, we also recommend slipping Michael Kors' version over a silk gown.

TMZ reports that Rihanna wore the outfit to West Hollywood's The Nice Guy on Tuesday morning. She arrived at 1 a.m., and A$AP Rocky arrived at 2. While the two have been photographed hanging out together since news of Rihanna's split from billionaire Saudi businessman Hassan Jameel broke in January, a source told E! that nothing serious is going on.

“Rihanna is single," the source said definitively. "She just got out of a long intense relationship with Hassan. She wants to be single and isn’t going to jump into something. She’s hanging out with A$AP Rocky, but she is not dating him.” Rihanna and Jameel split after dating for three years.

The two do have a past, the source added, but now, Rihanna isn't down for anything but a good time. "They have a long history, and she's just having fun."