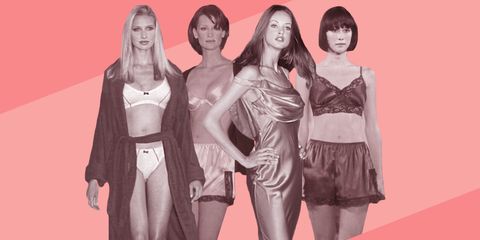 As we gear up to watch the annual Victoria's Secret Fashion Show next week, let's take a look back at the very first Victoria Secret models who graced the catwalk during the 1995 show at New York City's Plaza Hotel.

Is there anything that Stephanie Seymour can't pull off? The beauty went on to work with photography veterans Richard Avedon and Mario Testino and has appeared on magazine covers including Vogue and Sports Illustrated.

That pose. That dress. That hair. That stare. Lordt. Veronica Webb has been a major trailblazer in the industry, including being the first black supermodel to score an exclusive contract with a major beauty company, Revlon. She has also written for Interview, Details, and Elle as well as appeared in movies such as Jungle Fever and Clueless.

How is it that Ingrid can make a white t-shirt and underwear look so flawless? Winner of Elite Look of the Year, the Belgian model has appeared in campaigns for Guess Jeans, Ralph Lauren, and Saks Fifth Avenue.

Before Food Network, Catherine McCord slayed the catwalk. She's the founder of cooking site, Weelicious, which is dedicated to helping parents expose their kids to healthy, delicious meals.

Frederique van der Wal bared it all in what was probably considered one of the brand's first bombshell bras and has since developed entrepreneurial spirit. Winner of the 2011 Marie Claire Entrepreneur of the Year, she has guest lectured at Harvard University and was involved in licensing deals for a fashion line, fragrance, and calendar.

Magdalena Wrobel took pretty in pink to a whole new level in her silk dress. Known for being the former spokesmodel for Wonderbra's Three Degrees of Wonder, she has worked with designers including Bill Blass, Givenchy, and Oscar de la Renta.

The model-turned-real estate agent was a muse to Karl Lagerfeld in the early '90s and has worked with fashion houses including Dolce & Gabbana, Valentino, and Céline.

Can we please take a moment to bow down to Beverly Peele? The L.A. model rose to fame during the late '80s/early 90s and has appeared in magazines including Mademoiselle and Elle and featured in ads for Ralph Lauren, Versace, and Donna Karan.

Fun fact: Valerie has barely aged since this show. She's currently killing it as a real estate agent in New York City.

Keri Claussen had her day-to-night outfit covered. Starting off her career at the age of 15, Keri was featured in campaigns for Emporio Armani and modeled for Christian Dior and Givenchy.

Helena Barquilla is looking red hot in this red embroidered silk bra and panty combo. The Spanish beauty has modeling for Yves Saint Laurent and Jean Paul Gaultier on her resumé.

Can Karen Alexander look anymore tasteful in that slip dress?? She broke down barriers as one of the first black models to appear in the Sports Illustrated swimsuit edition and has been featured in *the* Pirelli Calendar.

Only Leilani can make the case for casually accessorizing lingerie with a black handbag. Since her modeling days, she founded Women of the World in California, which tackles education issues across the globe and has her own line of fragrances called LEILANI BISHOP.

Natane Adcock proves bralettes were just as chic then as they are today. Since her early days as a model for Calvin Klein and Chanel, she founded a film company with her mother called N+N Films, which specializes in fashion movies. 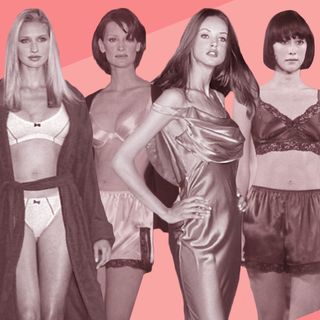 Advertisement - Continue Reading Below
This content is created and maintained by a third party, and imported onto this page to help users provide their email addresses. You may be able to find more information about this and similar content at piano.io
More From Fashion
Why I'm Obsessed With Longchamp's Greenest Travel
Functional—and Fashionable—Snow Boots
Advertisement - Continue Reading Below
The Biggest Spring Jewelry Trends From the Runways
The Best Pairs of Flared Jeans to Invest In
Chloé Just Became B Corp Certified
The Winter Trends to Start Investing In Now
Spring/Summer '22 Shoe Trends From the Runways
Halloween Costumes You'll See Everywhere This Year
Embrace In-Between Season With a Trench Coat
The Boots Brands Fashion Girls Are Obsessed With