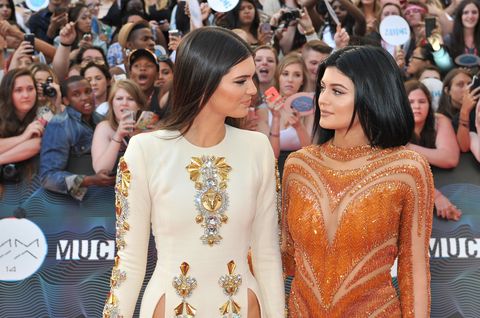 Not since Emma Watson's hot brother tilted his head moodily for
Burberry have we been so psyched for a fashion campaign starring celebrity
siblings—and only celebrity siblings.

Under the pennant of #BalmainUnconditionalLove, the house
has begun releasing its fall ads, the first two of which feature Joan and Erika
Smalls and clandestine fashion bloggers Kendall and Kylie Jenner in a position that suggests they're saving their sisterliness for when there aren't heavily beaded dresses at stake .

According to Women's Wear Daily, creative director Olivier Rousteing has also tapped Gigi and Bella Hadid, and for the men's campaign, twin models Armando and Fernando Cabral. The newest recruits to the #BalmainArmy "represent the fresh, diverse and open spirit of a new generation of fashion," Rousteing said, and convey the "strength, support and love that family members can provide to one another."

Super timely and inspiring considering the Kardashians' showing at last night's ESPY Awards, but also because, not that long ago, they were kicking each other in the groin.

Chelsea Peng I'm Chelsea Peng, the assistant editor at MarieClaire.com.
Advertisement - Continue Reading Below
More From Fashion
Behold: The Sexiest Looks at the 2020 Grammys
The Best Red Carpet Looks at the 2020 Grammys
Advertisement - Continue Reading Below
Shop Kate Middleton's Personalized Charm Necklace
PSA: Anthropologie Is Having a Sale All Weekend
Treat Yourself to These Pretty Lingerie Pieces
Doutzen Kroes Goes Behind the Scenes at Dior
Louis Vuitton Unveils Its Spooky Pre-Fall Lookbook
Meghan Markle's $65 Sunglasses Have Been Restocked
The Best Work-Appropriate Pieces Under $130
These Are the Best Work-to-Weddings Pumps