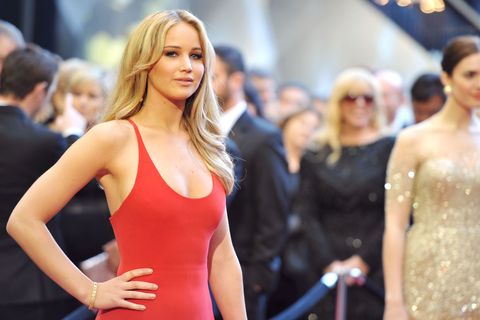 Hearing Jennifer Lawrence discuss the numerous times she's been horribly body-shamed by producers and executives in Hollywood is one of the most depressing things I have to write about. But, as Vulture reports, Lawrence says that things have changed a lot for her since she became a successful movie star.

Lawrence is currently at San Diego Comic Con to promote Mockingjay: Part 2 (which so far looks insane). At a panel, she was asked if there would be better roles for women in the future. "I would hope so," she answered. She then got very real about possible foot-in-mouth dangers, admitting that her response was "risky." "I'm starting this new thing: I've tried to develop a filter," Lawrence said. "This could blow people's hair back in a good way, or it could be my last time at Comic-Con."

But it was her statement about body-shaming in Hollywood that was most illuminating.

"I had a conversation with somebody about the struggles with weight in the industry—I know that's something I talk nonstop about," she said. "And they were saying, 'All of the main movie stars aren't very underweight.' I said, 'Yeah, because once you get to a certain place, people will hire you. They just want you to be in the movie, so they don't care.'"

Lawrence revealed that there *is* a lot of pressure on young actors and actresses "who have not made it to a certain place," though. "I'm not really in a place where I can complain or speak to not getting enough roles, because I'm very lucky to have a lot of opportunities," she said. "But I would be interested to hear someone who is not in two franchises answer that question."

Exactly, because when you are Jennifer Lawrence with an Oscar, two Golden Globes, a truck filled with countless other awards, a proven history of box-office success, and are one of the most popular action-movie stars in the world, no idiot who is trying to cast you in their film would dare tell you anything bad about the way you look, period.

What would be *really* awesome is if those idiots didn't say anything about women's bodies ever. Because they don't have the right, and it's damaging to women everywhere, and it's just a really backwards approach.

Rebecca Rose Writer I'm a writer for Cosmopolitan.com manning the fort during the night shift (because I love staying up late and hate getting up early in the morning).
This content is created and maintained by a third party, and imported onto this page to help users provide their email addresses. You may be able to find more information about this and similar content at piano.io
Advertisement - Continue Reading Below
More From Celebrity
The Queen Has a Rule Against Bad Talking Family
The Queen Took a Pic of Philip With Her to Funeral
Advertisement - Continue Reading Below
The Queen's Tolerance Was the Key to Her Marriage
J.Lo "Likes" Shady IG Post After A-Rod Split 👀
Beyoncé Shares Photos of Her White Power Suit
Will & Kate Welcomed Harry Back Into Their Group
Queen Left a Handwritten Note on Philip's Coffin
The Queen Said Grief Is the Price We Pay for Love
All of the Photos from Prince Philip's Funeral
The Queen Wore This Brooch to Philip's Funeral