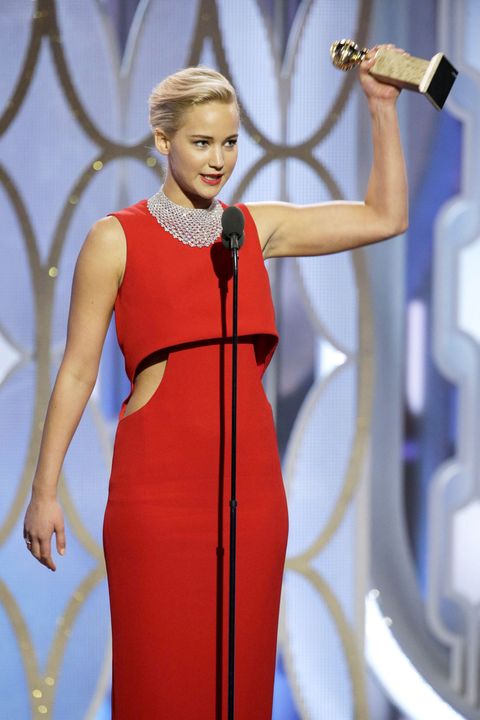 Jennifer Lawrence does not tolerate phubbers. That's what one reporter just learned the hard way, but some are calling it an unfair call out.

Jennifer Lawrence calls out a reporter for not looking up from his phone. #GoldenGlobes #backstage https://t.co/anWeQCsIL6

On Sunday night, after accepting her award for "Best Actress in a Motion Picture, Comedy or Musical " for her role in  Joy, Jennifer was backstage answering questions when she happened to notice a reporter asking her questions wasn't fully engaged in the moment.

"You can't live your whole life behind your phone, bro," she told the journalist. "You gotta live in the moment."

He apologized and laughed it off and moved on to his question. He asked her about Oscar night and she again stopped him.

"We're at the Golden Globes," she said. "If you put your phone down you'd know that."

Damn,  J-Law. It seems like the reporter (whose first language is not English) was just trying to ask about her chances for winning an Oscar next month, but Jennifer must have felt differently (or used the question as an opportunity to kid around with him more about it?)

Many on Twitter thought it was a bit harsh.

Jennifer Lawrence was pretty wack for what she did to that reporter. Sounds like he took it like a champ too

It went from "YESSS, YOU TELL HIM, J LAW!" to "SHE'S RUDE, THROW HER INTO THE VOLCANO" in like two minutes.

Wow. So much drama at the Golden Globes this  year.

Rebecca Rose Writer I'm a writer for Cosmopolitan.com manning the fort during the night shift (because I love staying up late and hate getting up early in the morning).
Advertisement - Continue Reading Below
More From Celebrity
Best Reactions to Brad and Jen's SAG Reunion
Brad Pitt Went to Jennifer Aniston's Holiday Party
Advertisement - Continue Reading Below
See Brad and Jen's SAG Awards Reunion
Brad Pitt Watched Jen's Speech Backstage
Brad Pitt Jokes That He Has a Tinder Profile
Jen Reacts to Brad's SAG Awards 2020 Speech
Why Charlize Theron Wore a Necklace in Her Hair
Sophie Turner Has Bambi Eyes For the SAG Awards
Prince Harry, Meghan Markle Could Be on The Crown
Harry Says Archie Just Saw Snow for the First Time