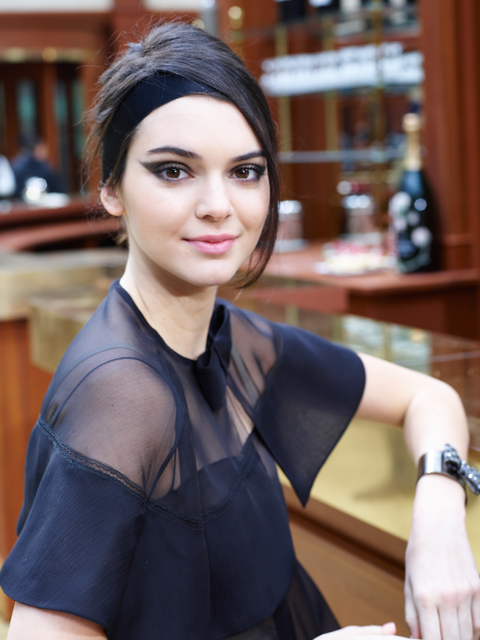 Kendall Jenner will not admit to any bad habits ("I'm perfect, so…." she teasingly tells Lovemagazine), but the 16th highest-paid model will name a flaw or two. "There's a lot of annoying things about me," she tells the outlet in a video interview. "I don't know, I'm really shy at first, and I don't really like it. I wish I was a little more outgoing."

She shared a couple of other tidbits, including:

Her phone screen saver is Cara Delevingne: "I have two phones: One of them is a dog with a gun in its mouth because he's cool, and the other one is Cara, and Cara has me. So, say you were holding up both phones, like we would be looking at each other."

The phone equivalent of a best friends necklace

She finds tattoos sexy (a nod, maybe, to rumored boyfriend Harry Styles): "Sexy is confident. Ooh, tattoos are sexy. So many things."

She played hooky in high school: "When I was at high school, I used to pretend that I had work and I would go and tell the head of school that I like really needed to leave, and I was really stressed out because I had work. Then I would just leave school, and I'd bring Kylie with me, but she didn't get permission. I would just leave school and go hang out with my boyfriend and like go get food and just do absolutely nothing."

And she has strong opinions on that viral dog pants meme: "A dog would wear pants on just his bottom half because his top half is arms. They're not legs. Okay? It's dog arms."

Alyssa Bailey News and Strategy Editor Alyssa Bailey is the news and strategy editor at ELLE.com, where she oversees coverage of celebrities and royals (particularly Meghan Markle and Kate Middleton).
Advertisement - Continue Reading Below
More From Celebrity
Kate and Meghan Are Glowing In Massimo Dutti
The Jonas Brothers Remade a Scene from 'Camp Rock'
Advertisement - Continue Reading Below
Harry Doesn't Want 'The Crown' to Cover His Life
Meghan's Emotional Visit to a London Dog Shelter
Taylor Swift's Mom, Andrea, Has a Brain Tumor
Kate Wore a Great Chevron Blouse to UK Event
Brad Pitt and Jennifer Aniston's Pics, Analyzed
58 Celebrities Who Hated Their Roles
Prince Harry Grins as He Returns to Canada
Meghan Markle Went on a Hike With Archie