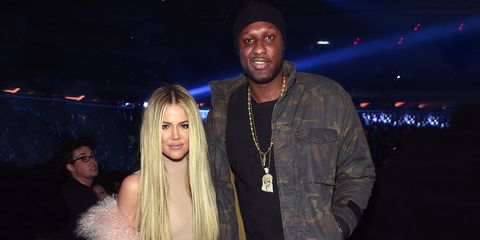 Khloé Kardashian is expecting and her child will be the third in a triad of Kardashian-Jenner babies born in 2018. The Kardashian babies have drawn a ton of interest, as anything associated with the famous family is bound to do. And, since everyone seems to have an opinion about these women's bodies, someone asked Khloé's ex-husband, Lamar Odom, to weigh in on the state of her uterus.

During an interview with Access, Lamar talked about Khloé's pregnancy and speculated about her abilities as a mother (*heavy sigh*). Thankfully, most of what he had to say was overtly positive.

“When a woman is loved correctly, she becomes ten times the woman she was before” Thank you my love ❤️

"That’s gonna be one spoiled ass baby, too," he added. While it was probably meant as a compliment (Khloé and her boyfriend, NBA player Tristan Thompson, certainly have the means to give their future child pretty much anything he or she could ever want), it's probably best not to speculate about how anyone will choose to parent their children, just as a general courtesy.