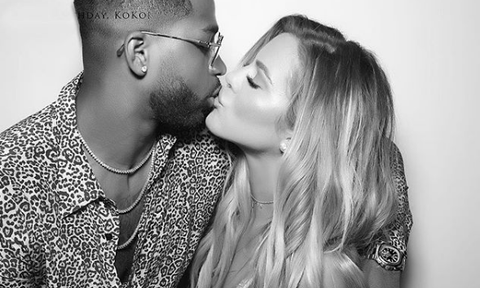 Yesterday, Khloe Kardashian gave birth to a baby girl! Despite all the drama around her boyfriend's cheating scandal, Khloe reportedly allowed Tristan Thompson in the delivery room with her during their child's birth. But that's not all—according to a family source, "She’s basically already forgiven him."

"Khloé is feeling nothing but happiness right now. She is head over heels in love with her little girl—she is just consumed with love. Absolutely nothing else matters," the source tells PEOPLE.

FBF to one of my favorite days with all of my favorite people... my surprise party 🎉 man, everyone was sooooo good at keeping that secret! Hrush, Jen and Tristan were so calm, cool and collected during glam 👀 I need to watch you sneaks lol That was such an epic night!

Despite earlier reports that she was "distraught" and feeling "defeated and betrayed," PEOPLE's source says Khloe's ready to put the whole thing behind her:

"She’s so incredibly happy that her baby is here, that she is big and strong and healthy and beautiful, and so right now Khloé truly has no other cares in the world. She isn’t even mad at Tristan right now," the source continues.

"She’s basically already forgiven him," the source adds. "She is in a bubble of love and peace and happiness right now, and everything that happened with Tristan is less about ‘cheating’ and more like, it was just a random drunken hookup that meant nothing and was kissing at most and didn’t lead to anything else and was the fault of stupid groupies trying to trap him, and everybody just needs to move on."

Best wishes for Khloe and her new baby!

Advertisement - Continue Reading Below
More From Celebrity
The Future of Harry & Meghan's Sussex Royal Brand
Sussexes Announce Plans to Move to North America
Advertisement - Continue Reading Below
Queen Says She's "Particularly Proud" of Meghan
Meghan and Harry Will Still Live at Frogmore
How Meghan Markle and Prince Harry Will Make Money
Harry and Meghan's Royal Exit Is Official
Selena Got Choked Up Reflecting on Her Love Life
Queen's Aides Are Struggling to Finalize Megxit
Katie Holmes Is Struggling With Adulthood, Too
Doria Ragland Says Meghan Will "Always Be Okay"