Your favorite celebrity couple Chrissy Teigen and John Legend have officially welcomed their baby boy into the world. Chrissy announced the news, unsurprisingly, via Twitter. Her simple tweet read, "Somebody’s herrrrrrre!" with baby bottles and the hugging face emoji.

This is the second child for Teigen and Legend, whose daughter, Luna Stephens, was born in 2016. Chrissy announced that she was pregnant with her second child back in November when she posted an adorable Instagram video of Luna touching her stomach and saying, "Baby."

The couple hasn't shared any additional information about their new baby at this time. Congrats to Chrissy and John! 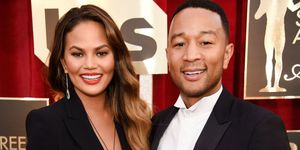