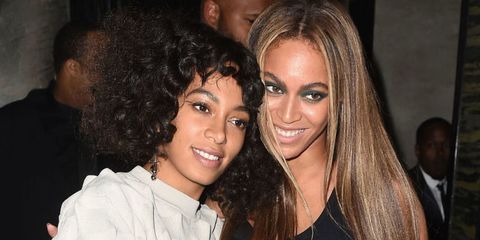 When Solange released her new album, A Seat at the Table, on Friday, her fans were quick to acknowledge its intended mission to empower black women. But listeners also swiftly drew comparisons to her sister Beyonce's Lemonade album, which, on top of the themes of infidelity and marriage, carried a similar message of empowerment. While discussing her new album with The Fader, Solange explained what makes A Seat at the Table and Lemonade so similar, and whether they work as "companion records."

"We have the same mother and the same father. We grew up in the same household, and so we heard the same conversations," Solange told the magazine, even tying in her mom Tina Lawson's social media presence. "One of the joys in your mom being an Instagram star is that people are, I think, starting to understand the environment that we grew up in. Through her voice and organizing, and her really being an advocate for black equality—and obviously through the intro of 'Don't Touch My Hair'—people are a little clearer in terms of the upbringing that we had and us having these very politically-charged, socially-charged conversations on a daily basis."

Beyoncé, Solange and Tina Knowles in 2007.

The singer continued: "It shouldn't be surprising that two people who grew up in the same household with the same parents who are very, very aware—just like everyone else is—of all of the inequalities and the pain and suffering of our people right now, would create art that reflects that."

Their father, Matthew Knowles, was part of the Civil Rights Movement, Solange told Fader. He participated in sit-ins and marches, and endured being spit on, hosed and tasered while he was in school, she said.

"And I don't think that there's any way for your parents to go through of all that, and you not have a certain level of sensitivity and consciousness to what's happening around you and wanting to use your voice to reflect that," she said.

Beyoncé and Solange onstage at Coachella in 2014.