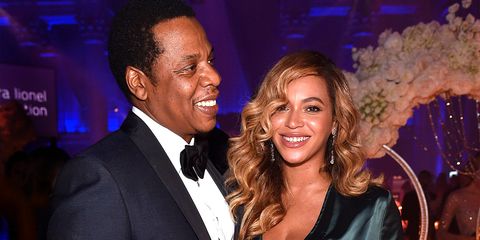 Major news for Beyoncé fans a.k.a EVERYONE: It looks like the singer is going on tour in 2018, alongside husband Jay Z!!!

According to Pitchfork, the "On the Run 2" tour was announced on Ticketmaster and over on Beyoncé’s Facebook page. However, the posts have now been deleted—but not before fans saw the news.

Pitchfork is reporting that the first concert on the tour was listed as "Monday, July 30 at Philadelphia’s Lincoln Financial Field." They screencapped the listing, so you can see the proof right now.

Beyoncé and Jay Z last went on tour together in 2014, with the first On the Run tour. They reunited in 2017 for their collaboration, "Family Feud," on Jay Z's 4:44 album.

Amy Mackelden Weekend Editor Amy Mackelden is the Weekend Editor at HarpersBAZAAR.com, where she writes about entertainment, celebrity news, beauty, and fashion.
This content is created and maintained by a third party, and imported onto this page to help users provide their email addresses. You may be able to find more information about this and similar content at piano.io
Advertisement - Continue Reading Below
More From Music
Princess Diana's Butler Talks 'The Crown'
Reese & Ryan's Son, Deacon, Drops His First Single
Advertisement - Continue Reading Below
Life Advice From an Icon, Cher
J.Lo Is Basically Naked on Her New Single Cover
Karaoke Songs Anyone (Yes, Anyone) Can Rock
Um, This Dude Claims Lady Gaga Stole “Shallow”
Sad Taylor Swift Is the Best Taylor Swift
Jennifer Lopez's NYC Concert Was Evacuated
Miley Cyrus Channels Britney Spears' Iconic Look
Ginger Spice Apologizes for Leaving Spice Girls