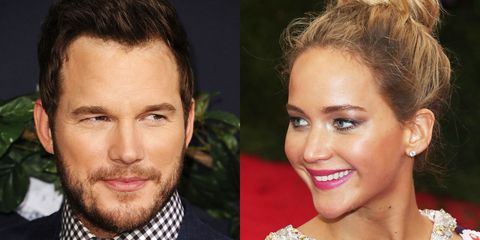 Jennifer Lawrence, national treasure and undeniable baller, was once the poster child for Hollywood's gender problem because she was paid 5 percent of American Hustle's box office sales to Bradley Cooper and Christian Bale's 7 percent. Did she quit? No. Did she pout and refuse to work with men ever again? No—she left Bradley to die in the woods in Serena, then she went and earned herself a $20 million payday.

For her next film Passengers, described as a "romantic sci-fi drama," JLaw is reportedly set to make significantly more than Chris Pratt, rider of an ongoing red-hot streak and the movie's male lead. THR reports Lawrence will take home $20 million plus a 30-percent share of the back end, compared to Pratt's $12 million.

This is capital-G great, and not just because Jenny's getting her money. 1) The studio believes in her/her star power. 2) JLaw believes in herself enough to walk away if she didn't get her due. 3) Another step toward equal pay! And 4) I just know Chris is going to come out and say something supportive, so this is awesome on all fronts.

Chelsea Peng I'm Chelsea Peng, the assistant editor at MarieClaire.com.
This content is created and maintained by a third party, and imported onto this page to help users provide their email addresses. You may be able to find more information about this and similar content at piano.io
Advertisement - Continue Reading Below
More From Celebrity
Travis Covered His Ex' Name With Tattoo for Kourt
Kendall Jenner Wore a Bedazzled Pink Cowboy Hat
Advertisement - Continue Reading Below
Kourtney & Travis Will Def "Have a Baby Together"
Britney Is Done With "Rude, Humiliating" Family
Ben & Jen Are Meeting Up "Whenever Possible"
Anna Kendrick Looked Pretty in Pink at a Premiere
John Mulaney & Olivia Munn Might Split Up: Source
The Sussexes Worried Archie Would Attract Mockery
Diana Would Be "Thrilled" for Harry and Meghan
'Friends' Actor James Michael Tyler Has Died at 59