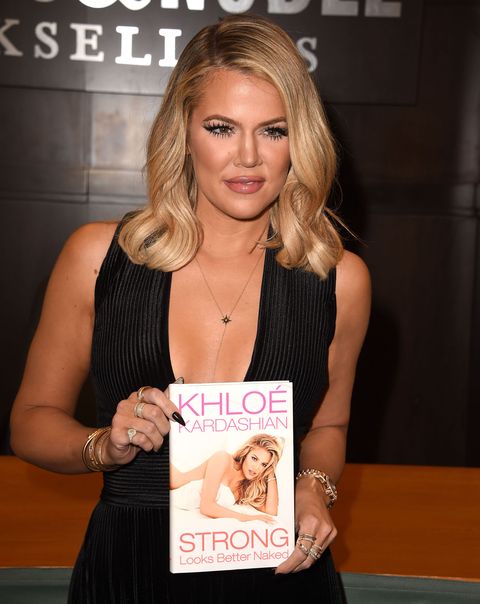 Khloé Kardashian has taken the healthy road, wrote a book about it, and made it into one of Amy Schumer's jokes. (So, #success.) But the 31-year-old has also been the subject of tabloid speculation—are those body changes all from the gym? Or could they be from a knife/needle/insert-plastic-surgery-reference-here?

"When I started working out, it wasn't about weight loss; I was going through a really hard time and needed an emotional release," she told Redbook (via E! News). "Once you start getting in the tabloids claiming you have fake body parts, then it's like, 'Okay, I made it. Now I'm really working out."

As for another part of her life that's been under speculation—her relationship with Lamar Odom—Khloé sets the record straight. 1) Yes, she still loves Odom 2) Yes, she's still dating James Harden.

"Our family brings a different amount of—not fame—attention. Instead of just being known for his talent, he's now known for being someone's boyfriend," she says of her relationship with Harden. "We're used to it, but for a person new to this, I'm like, 'Oh, God. I'm sorry.'"

The bright side of all of this? There's always Kris to lean on for support.

Samantha Leal Senior Web Editor I'm Sam, the senior editor at MarieClaire.com.
This content is created and maintained by a third party, and imported onto this page to help users provide their email addresses. You may be able to find more information about this and similar content at piano.io
Advertisement - Continue Reading Below
More From Celebrity
How to Copy Katie Holmes' Effortless Style
Chrissy's Red Lip Look Is Perfect for the Holidays
Advertisement - Continue Reading Below
Kate's Blazer and Sweater Combo Is So Chic
Princess Diana's Brother Called Out 'The Crown'
Ciara Talked Her Painful Pregnancy With Baby Win
Hailey Bieber Wears Sultry YSL for Her 24th Bday
J.Lo's AMAs Number Caused Censors to Freak Out
Gigi Shares New Photos of Her Baby Girl
Um, Why Is the Weeknd's Face Bloodied at the AMAs?
Gwen Stefani Walked Off on 'The Voice'