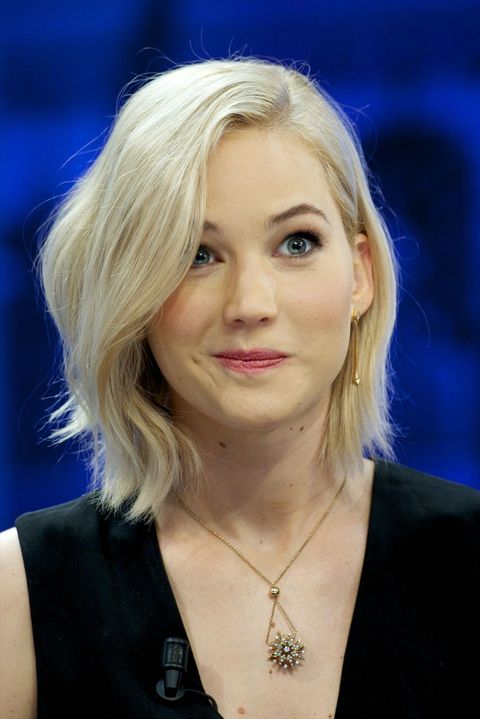 Thought Jennifer Lawrence was too young to play the titular character in Joy? Gird your loins (you're welcome), because she's reportedly playing Robert De Niro's mom in David O. Russell's next movie.

In an interview with Live! With Kelly and Michael, Lawrence said David gets "crap" for giving her parts that she's technically too young to play, and has responded by trolling everyone. "David is making something right now and the plan, so far, is for me to play Bob De Niro's mother," she explained. "I think that the more people give him crap about me being too young for his parts, he's like, 'Oh yeah, watch this'—so we'll see."

In case the age difference between Lawrence and De Niro wasn't already apparent, she's 25 and he's 72. So, to believably play his mother, J.Law would have to pass for even older than that. Huh.

Word on the street is that David O. Russell's directing a biopic about racketeering politician Buddy Cianci (which De Niro is producing), so it looks like Lawrence's next Oscar-nominated role could be the geriatric mother of a convicted felon.  *shrugs*

Mehera Bonner Contributor Mehera Bonner is a news writer who focuses on celebrities and royals.
This content is created and maintained by a third party, and imported onto this page to help users provide their email addresses. You may be able to find more information about this and similar content at piano.io
Advertisement - Continue Reading Below
More From Celebrity
Gabrielle's TikTok About Her Prom Date is So Funny
Victoria Beckham Shuts Down 'Spice World 2' Rumors
Advertisement - Continue Reading Below
Kendall Jenner Shared Her Experience of Anxiety
'The Voice' Star Blake Shelton Opens Up About Gwen
Sussexes Share New Birthday Photo of Archie
Charles Is Still Upset Over Harry's Oprah Tell-All
Meghan and Harry Share New Archie Photo
The Cambridges Share Their First Full YouTube Vid
Courteney Cox Said the 'Friends' Fountain Was Grim
Meghan Wins Copyright Claim Over Letter to Father