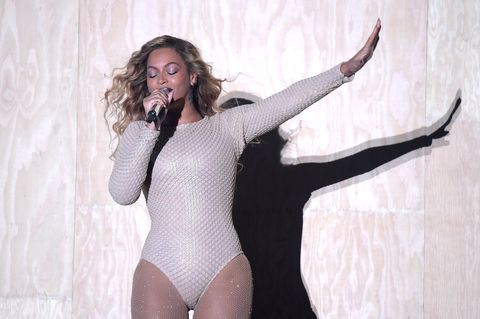 If the gossip rags are to be believed, Beyoncé has been pregnant 37 times now, with the current unborn Babyoncé holding the Guinness World Record for longest residency in a womb. But it's not logic that keeps the lights on, so once again, Beyoncé Might Have a Fetus Growing Inside Her.

As seen in a series of new photos, the apparently hyper-fertile singer crosses her arms over her stomach as she and her husband Jay Z exit a West Hollywood restaurant before hitting up the Golden Globes after-parties. So what's the big deal? Beyoncé covering or otherwise obscuring her body + the oversize paint-splattered army jacket = BABY ON BOARD.

Or…she's got a case of vacation bloat. Or...she just had the kind of blowout dinner that ends with petits fours. Or...we could just wait until she tells us.

Chelsea Peng I'm Chelsea Peng, the assistant editor at MarieClaire.com.
This content is created and maintained by a third party, and imported onto this page to help users provide their email addresses. You may be able to find more information about this and similar content at piano.io
Advertisement - Continue Reading Below
More From Celebrity
What Happens on Katie's Season?
Gigi Shared the Sweetest Photo of Zayn and Khai
Advertisement - Continue Reading Below
Meghan Shared the Cutest Update About Archie
Meghan's Heartfelt Father's Day Gift for Harry
Sophie Turner Shared a Sweet Unseen Pregnancy Snap
The Queen Has a Collection of Dog Toys for Sale
Meghan Revealed the Nod to Diana in 'The Bench'
Celebs Are Posting Tons of Father's Day Tributes
Will Spent Father's Day with George and Charlotte
Charles Won't Allow Archie to Become a Prince