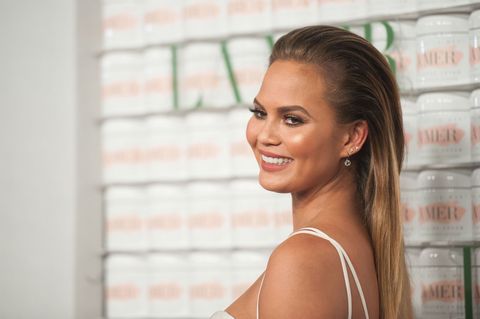 Chrissy Teigen recently revealed that she and her husband, human dreamboat John Legend, chose a female embryo during the IVF process. In other words, they made a decision about their future that's 100 percent their business, and the internet promptly did what it does best: threw a collective, Kanye West-style meltdown.

Chrissy was accused of "playing god" with her pregnancy (not to be a bummer, but this is the same argument anti-abortion advocates use...not a good look), and hopped on Twitter to defend herself.

what is that difference though? i've already created embryos with a doctor. only after must it be random? https://t.co/hyIwy3P1Oy

I also picked the embryo with a taste for bacon, a knack for magic and size 7 feet so she can always find shoes

anyhow I am not mad at anyone's beliefs but I don't really actively seek out people to make them feel bad about their decisions either.

so many typos, my apologies. pretty under the weather. probably this darn science baby.

natural or ivf, my daughter will never speak to another human like this, @baby_c_69 pic.twitter.com/aLfBS8O3eF

we didn't "throw away" anything and still would love to have more of both in the future. hard to explain such a complicated process here.

we didn't create a little girl. we had multiple embryos. girls and boys. we simply chose to put in a female first (and second)...

To echo Chrissy's thoughts, the IVF process is extremely complicated, and more importantly private. Yeah, she chose to speak publicly, but not quite sure that's an excuse to use the term "science baby" in any other context than watching NOVA all, "science, baby!"