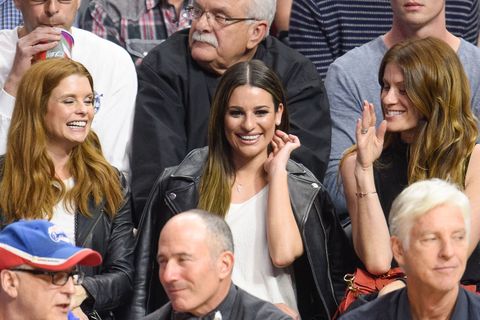 Lea Michelle recently went to a Clippers game, and had the joy of being seated a few rows behind Queen Beyoncé and her husband, Jay Z. Obviously, this blessed seating assignment rendered the entire concept of "sports" totally irrelevant, and Lea spent the game gazing at the back of Beyoncé and Jay Z's heads.

"I think there were basketball players there, but I was at the Jay Z and Beyoncé concert," Lea told James Corden on The Late Late Show. "I don't really geek out over people, but there's just something that comes over you, at least with me, when you see Beyoncé. I found myself being like 'they ordered a vodka soda, they're drinking it, they just took another sip. She put on her glasses and now she took off her glasses.'"

An impromptu anthropological study is really the only way to react when confronted with the holy deity that is Beyon-slay, but Lea has an explanation for anyone questioning her choices: "Don't you get it? They're our royalty."