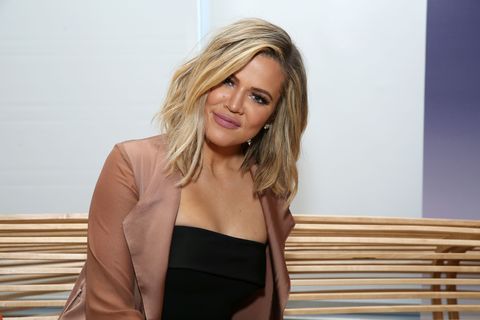 Khloé Kardashian's face fillers just clapped back. The star had a candid chat with Dr. Terry Dubrow during Kocktails with Khloé, explaining that her fillers (which at the time she thought were Botox) pulled a Judas on her face.

"I looked crazy, and I still think the effects are in there!" she said. "I went to have it dissolved like three times. My face was so f--ked."

Apparently, Khloé had the procedure shortly before Lamar Odom's accident, and her doctor said they didn't work because she was feeling too many "real emotions." So, note to everyone—if you are a human being who has things like "feelings," consult with your doctor before getting fillers.

Facial drama aside, Khloé expressed enthusiasm about undergoing a breast augmentation (to quote: "I think about it every day. I want big, big boobs!"), while Dr. Dubrow extolled the virtues of vagina lasering, saying "It basically re-virginizes you."

What a time to be alive, guys.

Watch Khloé talk about her changing face on KUWTK below (psst: she denied having fillers, presumably because she was under the impression she'd had Botox).

Follow Marie Claire on Instagram for the latest celeb news, pretty pics, funny stuff, and an insider POV.
Mehera Bonner Contributor Mehera Bonner is a news writer who focuses on celebrities and royals—follow her on Instagram.
Advertisement - Continue Reading Below
More From Celebrity
47 Really and Truly Adorable Celebrity PDA Moments
Dakota Johnson Rocks Gucci Suit in Milan
Advertisement - Continue Reading Below
The Cast & Director of 'Cruel Intentions' Reunite
Prince Harry Spotted on a Grocery Run in Canada
Kanye West Leaves Kim Kardashian in an Elevator
Channing Tatum Is "Happy" for Jenna Dewan
Inside Chrissy Teigen and John Legend’s Home
A Look at Royal Family Portraits Through the Years
Are The Weeknd's 'After Hours' Lyrics About Bella?
Kendall and Harry Had a Moment At the Brit Awards