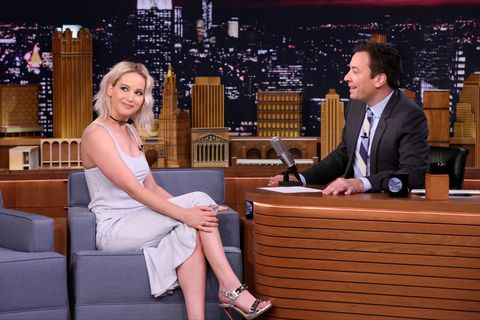 Jennifer Lawrence presumably experienced a lot of nerves and exhaustion and [insert random symptom here] while filming The Hunger Games, and apparently dealt with them by popping a casual Ambien. The star revealed this bemusing/amusing fact during a game of True Confessions on The Tonight Show, which is basically like Two Truths and a Lie, only fancy.

"I once took an Ambien before filming a scene in The Hunger Games," she explained to Jimmy Fallon and John Oliver. "I thought it was something else."

Apparently, Jennifer was filming a dancing scene, and we can only assume the Ambien wasn't super helpful considering that it puts you to sleep and has completely whack side effects. Either way, this is the most J.Law story ever, right?

This is the most J.Law story ever. In which she told an entire press room that Kim Basinger had died: