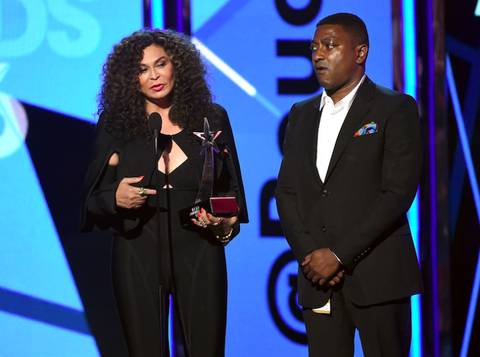 Beyoncé opened the BET Awards on Sunday night, but peaced out early because she had to get Europe in formation. The living legend asked her mom to pick up her awards, and poor Tina Knowles made the mistake of saying the following sentence: "[Beyoncé] had to run straight from the stage and get on the plane and fly to London for a concert."

Seems pretty innocent, right? Wrong. Apparently, Beyoncé was actually flying to Sunderland for a concert on Tuesday, which—according to the internet—clearly means Tina was spinning a web of lies. Or, you know, she was just genuinely confused about her daughter's plans.

Tina addressed the "controversy" in two epically long Instagram posts, first explaining Beyonce's sacrificial decision to perform for BET: "I am hurt and disappointed because I know what kind of work, sacrifice, and personal Money it took for her to do this show and support the Bet Award show and to give her fans that did not get to attend the concert a piece of her show."

Bey's mom also chatted about the hypocritical way fans treat celebrities, saying "We start lies and false rumors about our entertainers we celebrate when they stumble, we hope that they fall. We put them against each other when it's room for them all!"

Good point, Tina Knowles. Can't we just all build some sand castles and get along?

Mehera Bonner Contributor Mehera Bonner is a news writer who focuses on celebrities and royals—follow her on Instagram.
This content is created and maintained by a third party, and imported onto this page to help users provide their email addresses. You may be able to find more information about this and similar content at piano.io
Advertisement - Continue Reading Below
More From Celebrity
Iconic Party Photos From the Past
The Best TV and Movie Wedding Dresses of All Time
Advertisement - Continue Reading Below
40 Celebrity Sisters Who Look So Much Alike
40 Rare Photos of Grace Kelly Through the Years
A Look at Royal Family Portraits Through the Years
The 50 Most Popular Episodes of ‘Friends,’ Ranked