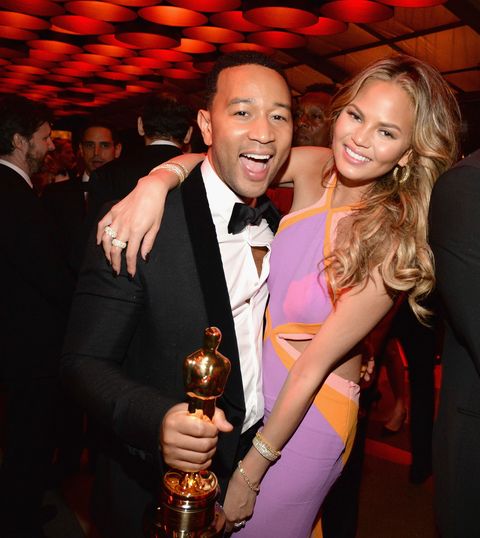 John Legend and Chrissy Teigen may be bad at charades, but Legend is surprisingly good at lovingly impersonating his wife.

The duo appeared on Bravo's Watch What Happens Live alongside Trevor Noah and played a special "Chrissy Teigen Twitter Feuds" version of Clubhouse Playhouse. Legend, blonde wig and all, read some of Chrissy's most famous tweets, while host Andy Cohen and Noah played the Twitter trolls who have attacked Chrissy via social media. He even held a fake baby (not nearly as cute Luna IRL, but whatever) when he impersonated Chrissy, responding to a hater who said she was holding Luna wrong. Chrissy squirmed from the audience and watched the LOLs unfold. As Cohen said, "nobody shuts down a Twitter troll like Chrissy Teigen." #Truth.

They also proved that a date night at WWHL is literally *the most fun.*

Never stop being this cute, you guys.