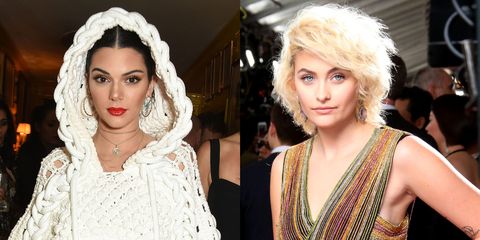 In news that actually isn't all that surprising given they're both from famous Hollywood families, Paris Jackson and Kendall Jenner appear to be squad goaling over in Los Angeles.

The pair were spotted strolling around a flea market on March 26, and apparently they were "hanging out like best buds."

"The girls seemed very comfortable with each other— joking around and talking a lot while shopping for records," a source tells ET (check out photos from the hang session this way, BTW). "They were hanging out like best buds."

Apparently, Jackson bought herself a Beatles album, though she was also seen checking out a copy of Thriller by her dad Michael Jackson.

As ET notes, Kendall Jenner visited Neverland Ranch when she was a kid, and actually had a run-in with Michael Jackson: "I was like, 'Oh, my God! That was Michael Jackson!'" she told GQ. #TheCircleOfLife

Mehera Bonner Contributor Mehera Bonner is a news writer who focuses on celebrities and royals.
This content is created and maintained by a third party, and imported onto this page to help users provide their email addresses. You may be able to find more information about this and similar content at piano.io
Advertisement - Continue Reading Below
More From Celebrity
Lilibet May Be Christened in California After All
The Sweet Family Photos in Prince William's Office
Advertisement - Continue Reading Below
Royal Family Members Can’t Eat Pasta or Potatoes
Prince George Is an Environmentalist, Too
Salma Hayek Looked Super Hot in Leopard Print
Britney Spears Just Trolled Justin Timberlake
Billie Eilish Says Kate and Will Were "So Normal"
Prince William Slammed Billionaires' "Space Race"
Lady Gaga Draped Herself in $100 Bills
Kate Middleton Wore Green to Celebrate Nature