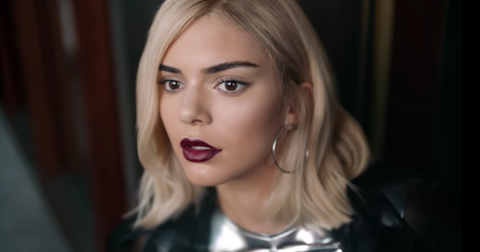 Kendall Jenner is stepping into Cindy Crawford's shoes as the new face of Pepsi, and her debut commercial is decidedly political.

The scene? A diverse peace protest full of #youths walking down the street past Kendall, who happens to be filming a commercial. (Meta alert!) Suddenly, she locks eyes with a handsome stranger, whips off her wig, joins the protest, grabs a Pepsi, and hands a police officer one while she's at it. (The shot pointedly resembles the famous photo of a girl bravely facing down police at a Black Lives Matter protest last year.)

Apparently "the joy of Cola" can unite us all, guys! And while encouraging young people to express their political opinions is generally a good idea, there's a lot to be discussed about companies co-opting social movements for their own gain...