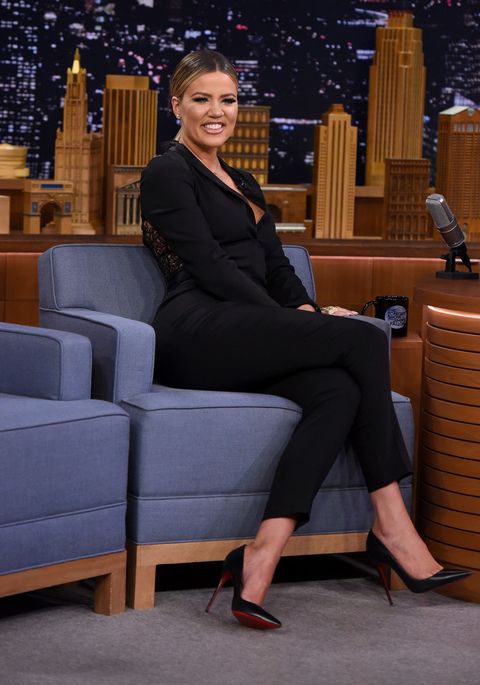 As ET Online reports, the party took place at the Blind Dragon nightclub in Los Angeles. Before the birthday girl arrived, her sisters, Kim and Kourtney Kardashian and Kendall and Kylie Jenner, took a pre-surprise selfie. As you do.

Tristan nailed the decor and food—the club was decked out in gold and the snack table featured an array of sweet treats, from donuts to cake pops. We're hoping the Revenge Body star indulged in a well-deserved birthday calorie splurge.

But what will really give you FOMO are the photo booth pictures from the party, which are just perfection.

Yep, we'll officially be spending the next year hoping we get an invite to Khloé's 34th.

Kayleigh Roberts Kayleigh Roberts is the weekend editor at Marie Claire, covering celebrity and entertainment news, from actual royals like Kate Middleton and Meghan Markle to Hollywood royalty, like Katie Holmes and Chrissy Teigen.
Advertisement - Continue Reading Below
More From Celebrity
A Look at Royal Family Portraits Through the Years
Are The Weeknd's 'After Hours' Lyrics About Bella?
Advertisement - Continue Reading Below
Kendall and Harry Had a Moment At the Brit Awards
Dwyane Wade on Getting Zaya's Pronouns Right
Harry Styles' Diana-Inspired Brit Awards Outfits
Jenna Dewan and Steve Kazee Are Engaged
Kim Seemingly Tried to Kiss Kanye on a Kiss Cam
Ashley Graham Continues to Spread Body Positivity
'Bachelor' Victoria F. & Peter's Ex Had a Fight
Watch Meghan Attend the Ballet with a Puppet