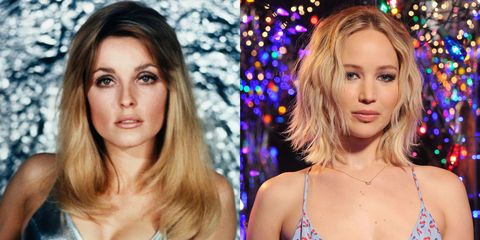 How are you doing today? If you're name is Jennifer Lawrence, the answer is probably:

The reason? Because Sharon Tate's sister has randomly decided Lawrence isn't "pretty enough" to play her in Quentin Tarantino's new movie, which is both very mean and very untrue. A) JLaw is gorgeous, and B) this casting decision should be predicated on acting ability, not "good looks."

When asked if she'd rather have Margot Robbie or Jennifer Lawrence play her sister, Debra Tate said "Not that I have anything against [Lawrence], but she's...she's not pretty enough to play Sharon. That's a horrible thing to say, but you know. I have my standards."

Tate was murdered in 1969 by Charles Manson's cult. She was the wife of director Roman Polanski, and Tarantino's film is reportedly centered on her death. Oh, and Debra Tate owns the rights to her sister's image and likeness.

Mehera Bonner Contributor Mehera Bonner is a news writer who focuses on celebrities and royals.
This content is created and maintained by a third party, and imported onto this page to help users provide their email addresses. You may be able to find more information about this and similar content at piano.io
Advertisement - Continue Reading Below
More From Celebrity
Ryan's Mother's Day Tribute to Blake Is LOL
How Celebrities Are Celebrating Mother's Day 2021
Advertisement - Continue Reading Below
Queen Elizabeth Is Now Selling Beer and Gin
Meghan Markle Wore Carolina Herrera for Vax Live
Princess Charlotte, 6, Tells Everyone She's 16
Meghan Wears Cartier Tank Watch for Vax Live
J.Lo Sang a Sweet Duet With Her Mom at Vax Live
Meghan Discussed Her Daughter in Vax Live Speech
Prince Harry Talks Digital Pandemic at Vax Live
Harry and Will Have Been Arguing for Months Now