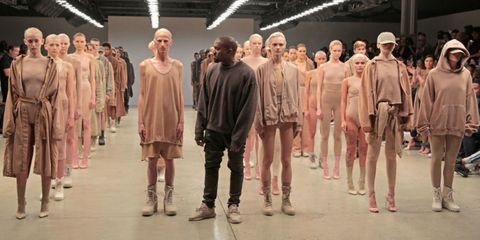 Kanye West's Yeezy season 4 show is going down right now―which you can watch via livestream!―where almost anything could happen. (A Taylor Swift appearance, since she's in New York City? A new music drop, like last season?) Fashion editors didn't even know the venue until today.

Below, everything happening at Kanye's extravaganza of a fashion show:

Our Facebook Livestream of the show is ongoing. Watch it below:

He runs off the runway after. The Tidal livestream just concluded at 4:56 p.m.

She's wearing the transparent boots Kim wore in New York the other day:

4:40 p.m.: The first model is walking. The Tidal livestream has begun. Water bottles are being given out.

4:24 p.m.: The Kardashians have just walked in, including Kim, Kendall, and Kylie Jenner:

Kylie just posted her own 'gram of the fam:

One model had to sit down as another brought her a bottle of water. About 17 models at this point are sitting because of the heat. We're all just waiting for something to happen. Tyga is also here with Kylie.

The models are creating a gradient with their clothes. The models in the front are wearing white-toned spanx, then beige, then army green, then black.

Models are taking breaks and sitting down:

Model undone by the heat at Yeezy. pic.twitter.com/vaZlisrMdm

Winnie Harlow is at the show:

4:05 p.m.: We're headed up to the stairs to park, where models are lined up along the green:

And what appears to be the venue: the Smallpox Memorial Hospital:

It looks like Carine Roitfeld, La La Anthony, and Jonathan Cheban all arrived in cars.

The Tidal livestream has just started with just a view of the city with Kanye West's "Ultralight Beam" playing.

The journey to #yeezy

Rumor on the bus is close to 1,000 people are coming to the show.

1:40 p.m.: We are OFF! Class trip-style, in buses―but like the medium fancy kind you take to Boston, not the yellow or Magic school bus kind―filled with editors.

And...we are crawling across town to Yeezy City (or, you know, the 59th Street Bridge to get to Roosevelt Island...)

1 p.m.: Carine Roitfeld shares a glimpse of the models on Instagram and the clothing looks...similar.

12:40 p.m.: Some preliminary details have been confirmed by Women's Wear Daily. Buses will take editors from West 26th street (Chelsea) to Franklin D. Roosevelt Four Freedoms Park on Roosevelt Island, where the show is taking place.

West has cast 500+ models via an open casting call for "multiracial models only." Gigi Hadid was spotted attending a fitting for the show, meaning she's likely to be one of them.