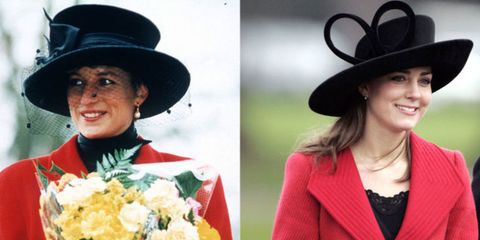 Diana attends her first public event with Prince Charles, at London's Goldsmith's Hall, in 1981; Kate at the Sun Military Awards in 2011.

Diana on her first official visit to Wales, in 1981; Kate attends the wedding of Laura Parker Bowles and Harry Lopes in 2006.

Diana in Wanganui, New Zealand during the Royal Tour of New Zealand in 1983; Kate gives her first public speech at East Anglia's Children's Hospices in 2012.

Diana arrives at Birmingham Airport in Catherine Walker, 1984; Kate and Prince George arrive at Wellington Airport in New Zealand for the beginning of the Royal Tour of Australia and New Zealand, 2014.

Diana carries a young Prince Harry off a plane at Aberdeen airport in Scotland in 1985; Kate, William and Prince George board their flight from Australia on the final day of the Royal Tour of Australia and New Zealand, 2014.

Diana wears Catherine Walker to the Cannes Film Festival in 1987; Kate wears Marchesa to a BAFTA event in Los Angeles in 2011.

Diana in Sandringham on Christmas Day 1993; Kate attends the Sovereign's Parade At The Royal Military Academy in Berkshire in 2006. 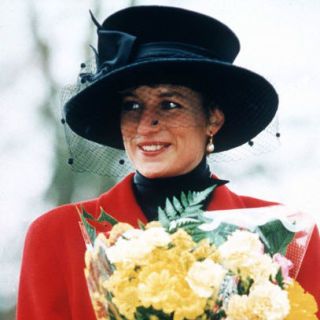 This content is created and maintained by a third party, and imported onto this page to help users provide their email addresses. You may be able to find more information about this and similar content at piano.io
More From Fashion
Found: Low-Back Swimsuits to Show Off Some Skin In
Maje Lauches an Ibiza-Inspired Capsule Collection
Advertisement - Continue Reading Below
The Caftan Dress: Your No-Brainer Summer Uniform
Rain Jackets That'll Make You Excited for Storms
The Best Swimsuits, According to 100s of Reviews
Chunky Sneakers We Can't Resist
Floral Dresses You'll Wear on Repeat
Let Amazon Help You Figure Out Your Work Wardrobe
In Partnership with Amazon Fashion In Partnership with Amazon Fashion In Partnership with
Amazon Fashion
The Evolution of Royal Engagement Rings
Summer Hats to Fall in Love With