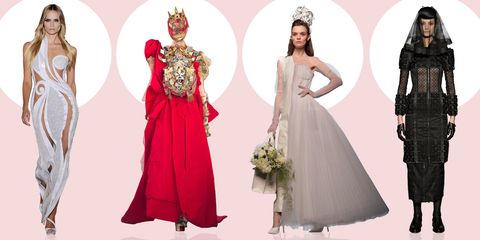 Taylor Kinney gave Lady Gaga the Heart of the Ocean in ring form on Valentine's Day. You know what that means: love everlasting and a dress that'll live on one of those "best celebrity wedding gowns of all time" lists. They don't seem like the kind of couple who'd go for a low-key City Hall affair, so we played stylist and picked out 10 more-than-memorable looks for Mother Monster's big day. You've got a handle on the custom hashtag, right?

The first rule of choosing a wedding dress for Lady Gaga: There are no rules. Wearing this crazy-beautiful ensemble from Monday's presentation/funeral to marry Taylor Kinney would be amongst the most life-as-a-performance things Gaga has ever done.

Yes, we can see that it's not white.

Right this minute, Gaga could be agonizing over a dress or cool, Bianca Jagger-like pants. Now she can have the best of both worlds in one drumpsuit. Dronsie?

Gaga had a good run at the 2010 Grammys; this should bring back some of those planetary vibes but more bridal and just a smidgen more #nopantsparty.

There was time when she basically morphed into Donatella, so it's only fitting we throw a Versace in here. This frock's like something a bad figure skater would wear to the Championships knowing she'll get disqualified, but she's cool with that because she just wants the publicity without pulling a Tonya Harding.

"You may now kiss the bride." *Taylor Kinney looks around and shrugs*

We're imagining this as Gaga's third after-party dress. (You didn't think she'd only wear one, did you?)

The cape. The cape! It's like a lacy, portable sarcophagus, which, you know, does sound an awful lot like a costume Haus of Gaga would dream up.

Girl, please. Hip-bone cutouts and a thigh-high slit are less than nothing when you're Lady Gaga. This is the option for if they get married in a church, BTW.

Notice how Gaga's kind of gone soft sartorially? This romantic, sweeping swath of velvet fits with her new aesthetic and hair, but it still has that booby, outrageous-in-a-less-obvious-way factor she's been favoring. (See: every costume she's worn to perform with Tony Bennett.)

The probability that Gaga chooses this puffer dress hinges on two elements: 1) that she and Taylor decide on a destination wedding, and 2) that that destination is somewhere terribly picturesque in the Swiss Alps.

Or, of course, she could throw us for a loop and go for something classic and demure that also presents countless opportunities throughout the ceremony to reenact the following scene from Sherlock. 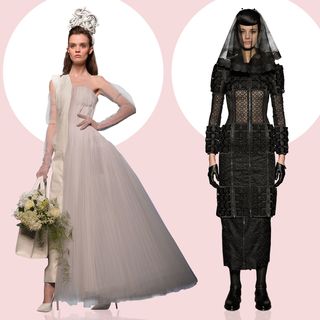