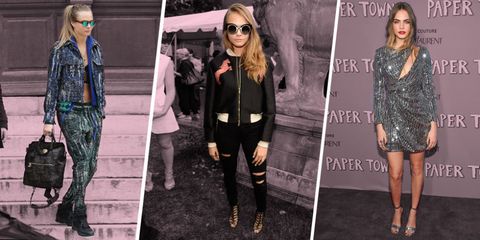 The thing about Cara is that, while she was first known as the model who hoarded bacon and could contort her features into impressively ghoulish expressions, she's also carving out a space for herself as a bona fide movie star. With that (reportedly permanent) career change comes an ever-changing wardrobe, the most exemplary looks from which we've collected here.

We open on present-day Cara, whose style mainly consists of leggy dresses and fitted suits. But it wasn't always like that.

Told you re: the abbreviated hemline thing.

Ditto. Also, here's an ode to her eyeshadow—just because.

Another strong pants look, though this one has the addition of hand-painted body art.

No shoes, no problem because I was too distracted making a note to bring the bandeau-under-suit pairing back.

Underworld boss who likes the finer things in life and cocktail stirrers Cara.

If you look closely, you can see the coolness radiating from Cara. If you look even closer, you can also see Stella McCartney grabbing Kate Bosworth's ass in the background.

The blouse-and-pencil-skirt combo is quite ladylike for C, but note the exposed midriff, which cleverly breaks up the solidness a fully-buttoned longer top would have created.

Plunging neckline + strapless = disaster for most regular people. But not her.

Although the musical half of CaKE wears Big-Moment gowns like nobody's business (she's a model, duh), you can tell she feels most comfortable in louche suits that mimic the sweats she likes for everyday life.

The fascinator: not really Cara. The sideboob: Yes.

Going chronologically—meaning you would start this gallery backwards—this studded Burberry number would come out of nowhere and slap you in the face. "I'm a major celebrity now," it would say. "And don't you forget it."

TBH, her beginning looks are a lot better than most people's most recent ones. It helps to be a fashion darling.

A star is born, but even in leather leggings and an Oscar the Grouch green jacket, she has yet to develop a definitive style. Just wait. 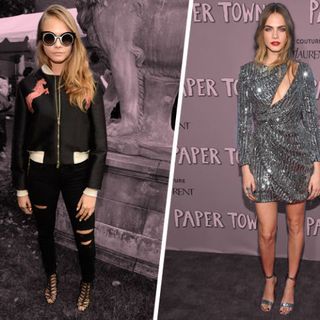