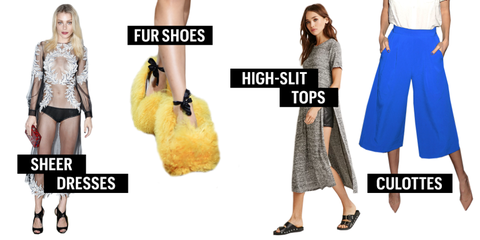 The bad news: Someday, after your kids discover your old Insta by Googling it in their minds, you will be forced to defend one of the below fashion items you wore this year. The good news: A few seasons after the previously described episode, you can cackle maniacally when your kids ask if you kept your Fendi fur bag charm.

So, like the Girl Scouts say, "Embrace new fashion, but put the old in storage because you never know when it'll come back."

Plenty of people are offended by these now, but enough celebrities and brands tried to make them happen that they *did* happen, which was not a bad thing for girls who wanted the look of a skirt but the freedom of pants with an identity crisis. It's just too bad public sentiment will win when fashion also recognizes that skirt-pants are just inherently kind of awkward.

I've got this one dangling from my bag strap right now, so I feel your pain. But looking back, what was once cute and clever (JUST LOOK AT HIS GOOGLY EYES) might have been 2015's answer to the previous year's visor all along.

Does everyone wear these where you live too? With sneakers and skintight denim because the slits are cut too high to classify this Franken-top as a dress? Fine if you're using it as training wheels for a real dress-over-trousers ensemble, but otherwise, let the high-slit, longline shirt go the way of the dodo.

The prettiest ugly shoe fits into the current (possibly waning) "Phoebe Philo or death" aesthetic, but honestly? They're not terribly flattering nor very fun.

If you own this Givenchy boob-cage shirt or any of its high-street brethren, know that it is officially passé the second it becomes 2016.

Same reasoning as above, really: It was like "Oooh, swishy" when the street-style set took up fringe, but like nature and Malcolm Gladwell dictate, we've reached the tipping point, and it's no fun anymore.

Chelsea Peng I'm Chelsea Peng, the assistant editor at MarieClaire.com.
Advertisement - Continue Reading Below
More From Fashion
Treat Yourself to These Pretty Lingerie Pieces
Doutzen Kroes Goes Behind the Scenes at Dior
Advertisement - Continue Reading Below
Louis Vuitton Unveils Its Spooky Pre-Fall Lookbook
Meghan Markle's $65 Sunglasses Have Been Restocked
The Best Work-Appropriate Pieces Under $130
These Are the Best Work-to-Weddings Pumps
I Need Kate Middleton's Leopard Print Skirt
North West Inspires Me to Dress Better
The Swimsuit Trends to Invest In for Summer
The Most Stunning Looks of Couture Week