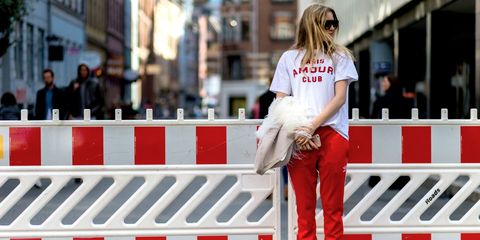 Before Kanye, there were three stripes. Now, there are still three stripes, but with a much higher profile, thanks in part to Yeezy. Should you forsake your Sambas and track pants for moth-eaten fleece, then? Hell nah. See below for five fresh ways to style the old-school gym clothes you never thought you'd wear again.

Advertisement - Continue Reading Below
1 How to Break Up a Tracksuit: Part I
Getty

Literally just make a whole different tracksuit using tracksuit parts from your friendly neighborhood tracksuit supplier, AKA your closet. Take the jacket from one, the bottoms from another, and glue it all together with a white tank, a wall-lean, and some classic uptown-girl accessories like the Valentino pumps.

2 How to Break Up a Tracksuit: Part II
Getty

Coincidentally (or not), this girl's done nearly the same thing, except we're going to use her to make two other points: 1) It is preferable not to wear sneakers when attempting The Adidas, because that could get too American-at-the-airport (plus you are not Missy Elliott). Which is why 2) you should wear red Gucci loafers to extend the line of your red-colored leg.

3 How to Break Up a Tracksuit: Part III
Getty

Visually, a whole Adidas tracksuit—unless very fitted, but you don't want that either—looks very blocky. So the trick here is to disconnect the parts with some bare skin (good to remember for any situation in which you want to wear big clothes and still show that you haven't got the figure of Barney the dinosaur). Also note how Bella Hadid tucked her pants into her boot tops for further streamlining.

Tell me: If not this Adidas T-shirt, what *would* you wear under a striped suit? A white tank? Boring. A bandeau? I mean, I would, but that isn't an answer for all seasons. Nothing? Ideal, but again, too niche. That's why this is pretty close to perfect.

5 This Has to Do with a Dress, Not a Suit
Getty

That is the beauty of the Adidas-branded T-shirt—it's "nothing" like a plain white Hanes, but it's also *not* nothing. That's why, if you're ever stuck wondering what to put under a slip dress or with something crazy-conceptual, choose this.