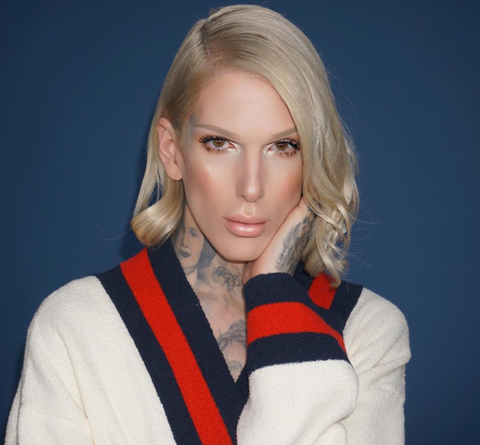 Makeup vlogger and perennial social media feuder Jeffree Star is at the center of yet more controversy, though this time it's not truly of his own doing. Rather, he's been caught up in a maelstrom centered on Kim Kardashian, who posted Snapchat videos defending Jeffree—and then later apologized for doing so.

You can read how it all started here, but basically it started with a tweet, where Jeffree called out Kim's shoddy swatching of her new powder contour set: "Umm...Kim what is going on with those new swatches?? Looks like chalk."

Kim then noticed that her stans were going after Jeffree, which led to her defending him, which included an acknowledge of racist remarks he'd made in the past. (Which he's also addressed.) The resulting backlash to both her and him, in the face of the week's escalating madness, has led Jeffree to release a flurry of tweets in response:

"Every news and media outlet in the world has emailed and called my office all day asking me for a Kim. K quote...Please fuck off. Talking about makeup has turned into a blood bath since yesterday. WAKE UP. THERE ARE MORE IMPORTANT THINGS 2 WORRY ABOUT. We have a literal PIECE OF SHIT for a "President" who is embarrassing our entire country and you want worry about Jeffree Star. #cantrelate

I get that people love drama and feed off of it, but attacking ME with hate and disgusting comments doesn't fix anything. You can't call me something that I'm not. It's getting old...Same bullshit every time there's online drama. CHILL and worry about YOU."

He followed that up later with:

"Who else is ready for this disgusting vile piece of shit @POTUS to be #impeached? The media wants to keep us all distracted by news headlines about me and Kim, but let's talk about how sad our country is right now. HEY HATERS: Instead of tweeting me and calling me 'faggot' and 'disgusting tranny' all day - try fighting for something important. Because with how dark and depressing America is right now, I don't think I'm important. Stop wasting time on gossip and focus on reality. If you're upset about Jeffree Star and contour swatches and makeup drama, get the fuck out of my mentions. You're wasting your own time."

Advertisement - Continue Reading Below
More From Beauty
Hailey Bieber's Beauty Routine Is So Simple
Facts to Know Before You Get a Keratin Treatment
Advertisement - Continue Reading Below
The 3 Lipsticks I Have In Rotation Right Now
Why Using a Product With Peptides Is Worth It
Created for From Marie Claire for Created by Marie Claire for
StriVectin Peptight
Line Edit: Eyeliner Trends That Are High Drama
Black-Owned Beauty Brands You Need to Know
The Body Lotion Your Dry Skin Has Been Craving
Know the Signs That Your Makeup Has Expired
Kendall Jenner Has Rapunzel Hair On 'Garage' Cover
WORTH IT: Royal Fern Skin Perfecting Essence